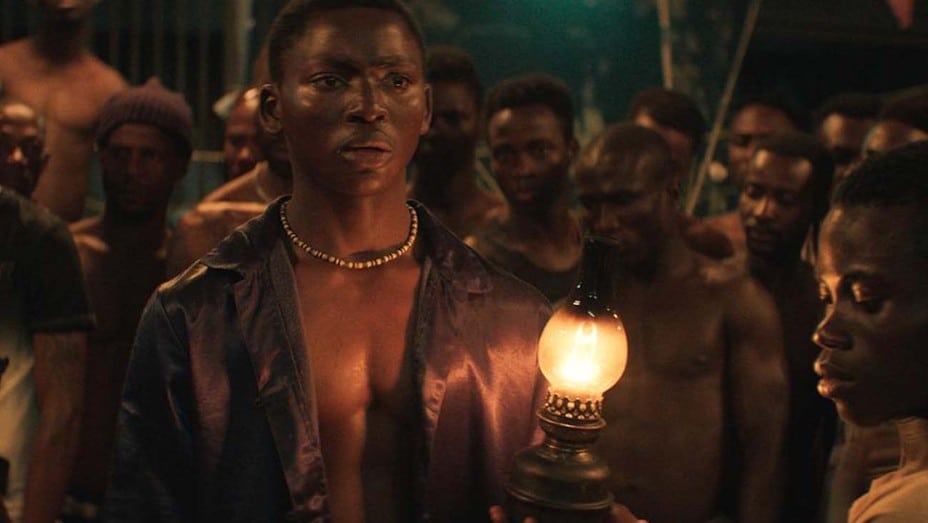 The Cote Ivorian contender for this year’s Academy Awards is an vibrant and atmospheric modern day riff on the legend of Sherherazade set within the confines of an Abidjan prison.

A second feature for Philippe Lacote who gained International acclaim for his Cannes competition film Run, it sees a young man struggle to survive in the hostile hellhole of La Maca prison (now home to 5,000 prisoners) by keeping the inmates entertain – risking certain death if he doesn’t, by sunrise.

Lacote blends elements of folklore and local history with exotic lighting techniques (casting ghoulish shadows on the felons’ faces) and a rhythmic soundscape that reaches fever pitch by the hyperrealist closing scenes, in this story within a story.

The inmates themselves have taken over this mammoth concrete  ‘asylum’ surrounded by the lush tropical scenery of the Ivory Coast, in West Africa (Senegal was used in locations). The chief henchman, Blackbeard (Tientcheu), is head of the prisoners, and will remain in power until he cedes to a more powerful rival, forcing him calmly to take his own life. His successor or ‘Roman’ (literally storyteller) has only just arrived on the prison scene, and seems rather lightweight by comparison but soon rises to the occasion.

On the night of a ‘red’ moon this Roman must mesmerise his fellow prisoners through until dawn with original stories of epic proportions. Luckily he only has to cast his mind back to his own family: his aunt was a noted West African storyteller, who grew up with an infamous rascal called Zama King. At this point the film takes on a fantastical dimension transporting us back in time to the reign of a Cleopatra-like queen (Laetitia Kay) with an outlandish wig.

At this point Denis Lavant arrives on the scene (as Silence) inspiring the young Roman (Bakary Kone) to wax lyrical as he gets into his stride with a tale of increasingly outlandish proportions. Roman reaches fever pitch with the constant threat of death creating palpable dramatic tension, and he diverges again and again spinning another string to his yarn, like some voluable over-excited salesman desperate to keep the patter going. The fellow inmates warm to the story adding their own embellishments with strident body movements, singing and dancing. This is a magical film that lives and breathes its unique sense of place deep in the heart of the mysterious African jungle. MT

BFI ONLINE | The Ivory Coast’s submission to the 93rd Academy Awards won awards in 2020 at Toronto, Thessaloniki, and the Youth Jury Award IFFR 2021.