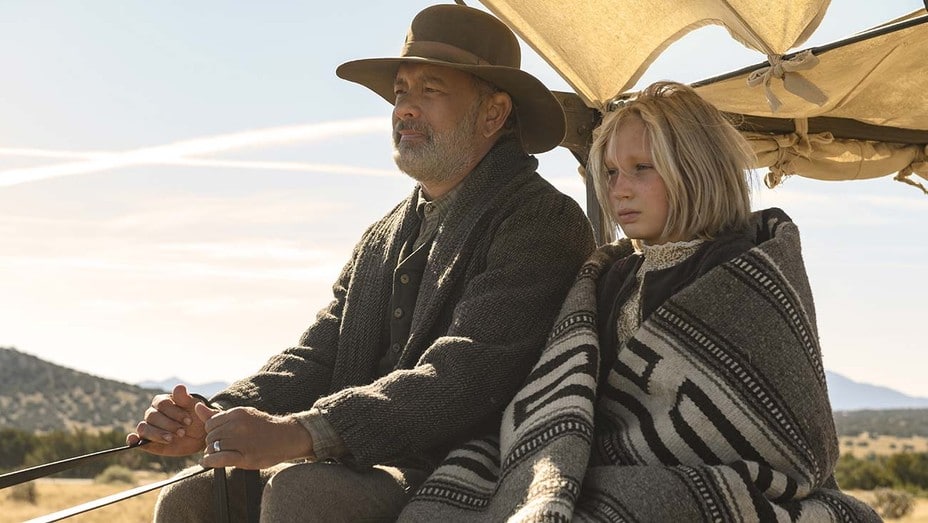 The American Civil War has come to a close and in Texas a virulent epidemic is sweeping through the panhandle. Tom Hanks and German newcomer Helena Zengel star as two lost souls drawn together in the aftermath of the tragedy, this once happened 150 years ago but Greengrass gives a contemporary feel with its migrant central characters.

Set on the wide open panoramas of the Southern desert yet intimate in its personal story of survival, the theme of storytelling is at the heart of this ambitious Western adventure, both for Greengrass and his lead, Captain Jefferson Kyle Kidd. The soldier has seen active service during the war but several years later has turned to ‘newscasting’ – making a crust out of telling spirited, often didactic stories that connect his audiences with the wider world. As he makes his way across the vast desert landscape, Hanks is believable and appealing as the strong and benign warrior.

Piqued with lively action sequences, News of the World is contemplative rather than swashbuckling but impressive nevertheless, wearing its burnished period detail on a war-torn sleeve, this is a well-mounted and poetic frontier adventure, and a departure from the director’s usual slick modern thrillers such as The Bourne Ultimatum and United 93.

Greengrass quickly establishes his statesman-like hero’s credentials in the opening scenes, a respectable horseman now down on his luck but making the best in his reduced circumstances, he still cuts dash spinning his newsy yarns with languorous dignity during long evenings in candlelit hostelries. One topical item relates to the opening of a new railway line from the Kansas border all the way to Galveston, that was the Pacific Railway’s first foray across Indian reservations.

Essentially a two-hander though with the occasional side-lining vignette, the slow-burning storyline carries a distinct whiff of cultural diversity, the Captain journeying through this lawless territory with a blond 10 year-old he meets while hitching up his waggon in the frontier town of Wichita Falls. And this relationship sets the reflective tone of their odyssey; he is mentor, protector and father-figure, a role Hanks pulls off with a respectable swagger, though the two lack a noticeable chemistry: Johanna is sullen, unreachable, but turns out to be a German orphan raised by a Native American tribe. Hanks finds himself tasked with relaying her to blood relatives in another part of Texas, against her will.

Writing with Bafta-award winner Luke Davies, Greengrass bases his script on Paulette Jiles’ 2016 bestseller that centres on two unlikely companions who gradually develop a mutual bond. Shooting took place in the magnificent scenery of New Mexico by Dariusz Wolski, his jerky intense handheld ‘urban’ scenes contrasting with the feral beauty of big desert countryside where the two encounter all kinds of surprises during their eventful escapade.

It soon emerges that Johanna is subject to some kind of kidnapping and is bound for San Antonio, so Kidd’s wings are clipped by the presence of the minor, who becomes his responsibility in the hostile terrain. The child has been let down by so many adults she proves unruly although vulnerable and lost in this turbulent country where settlers are at war with Native Indians and vice versa. And this milieu of conflict and danger provides a heady atmosphere to the couple’s journey. One episode sees their carriage involved in a terrible accident when the horse loses control over a mountainside. Another involves an ugly skirmish with some Confederate former soldiers (Covino, James and Lilley) who try to ‘buy’ the little girl, and have to be fended off. Johanna’s upbringing in Indian culture brings a spiritual and folkloric element to the Western adventure showing Hanks at his best in a gritty role of guardian for this tough but also thoughtful kid in a surprisingly lyrical piece of Americana. MT