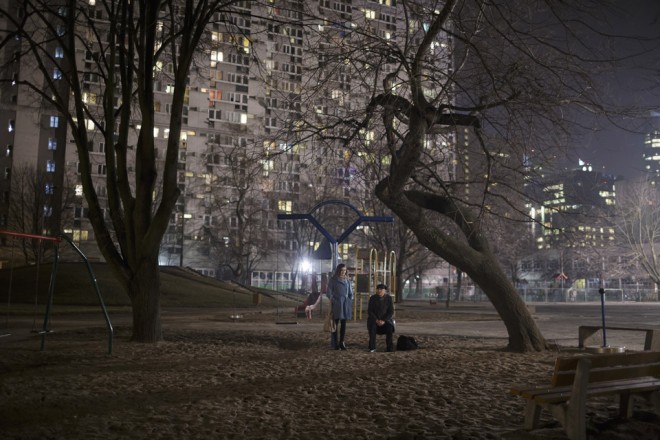 Warsaw is the place to be for the multiple protagonists of NEW WORLD, a three-part anthology by a trio of Polish first-feature directors, which updates the existential fables that might have popped up in a Krzysztof Kieślowski picture to an increasingly transglobal twenty-first century. Filmed in and around the capital city’s centre, and complete with seemingly obligatory nods to the ubiquitous Palace of Culture, the film was shown at the 31st Warsaw Film Festival (9-18 October) in the ‘1-2’ Competition, which is dedicated each year to debut or second features, following an in-competition premiere at Gdynia.

Named after one of Warsaw’s most important thoroughfares, located a few blocks east of the Palace of Culture, NEW WORLD was conceived as a kind of cross-section of contemporary Warsaw as experienced through the eyes of three foreigners who have elected to start a new life there. Segmented into three chapters, each named after its principal character, proceedings begin with Zhanna, directed by Elżbieta Benkowska, which follows a Belarusian mother (Olga Aksyonova) who has fled her husband, a musician and activist who has been arrested for his oppositionist views, and whose imminent release jeopardises her plans for newfound happiness. In ‘Azzam’, directed by Michał Wawrzecki, an Afghan (Hassan Akkouch) struggles to settle following a stint working as an interpreter for the Polish army in his home country. In ‘Vera’, directed by Łukasz Ostalski, a transgender woman (Karina Minaeva) has arrived from Ukraine to escape persecution and to undergo gender reassignment surgery; her new life is uprooted when her father shows up with her young son.

Given that each of its three directors worked with a different cinematographer, NEW WORLD has an absorbingly consistent visual palette. Poland has no shortage of great DPs to draw upon for inspiration, of course, and the director-photography partnerships do well here to create a coherent viewing experience, capturing this fine locale in all its flat-as-a-fart topographical glory. The work belies the multiple creative hands behind it. It’s worth mentioning this technical achievement, for it goes some way in elevating the film above the predictable shortcomings of site-specific portmanteau projects—namely an uneven visual palette and mismatched storytelling.

Painting Warsaw as a believably lit kitchen-sink backdrop that has nevertheless strived to outgrow the Stalinist architecture imposed upon after the second world war, NEW WORLD boasts an attentive verisimilitude that compensates for any of the scriptwriting inadequacies that occasionally threaten to flatten it. Here, the city seems torn between reinforcing the old threads of arthouse miserablism and embracing a new richness in colour. It possibly helps the work that its three directors aren’t Warsaw natives: Benkowska and Ostkalski are both Gdańsk-born graduates of Gdynia Film School, while Wawrzecki studied film directing in Silesia and scriptwriting in Krakow.

Fitting, then, that the film’s three stories should all intersect, in a climactic nod to Kieślowski’s THREE COLOURS TRILOGY, at the crossroads of New World Street and Jerusalem Avenue, with recurrent glimpses of Joanna Rajkowska’s ‘Greetings From Jerusalem’, an incongruous-looking 50-foot tall palm tree that was erected on a roundabout as a permanent outdoor installation in 2001, and which doubles here as a narrative anchor, lending a kind of everyday otherness by which newcomers may orient themselves amidst the more familiar brutalist apartment blocks of Eastern Europe. MICHAEL PATTISON