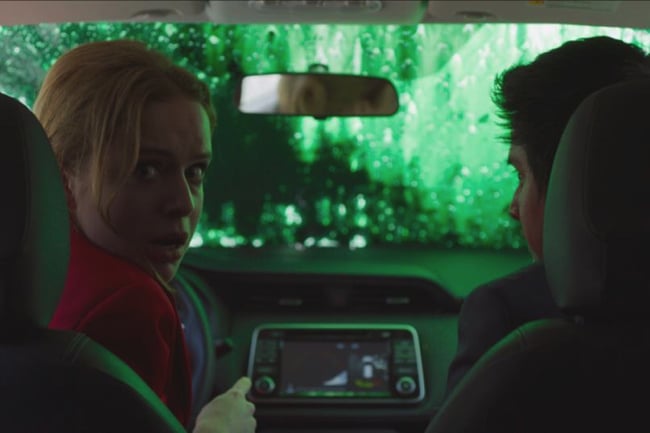 After Lucia, Chronic and April’s Daughters were all astringent social dramas this short sharp shock of a feature is an extreme expression to his country’s corrupt social and political divide and delivers an uncompromising gut punch that has a distinct shades of Costa Gavras’ 1972 outing State of Siege.

The aesthetic is brash and the pace fast-moving – bewildering almost – as payback delivers payback, all done in less than 90 minutes. Three factions are involved: the wealthy, the Military and the working classes and no one emerges a hero, or even particularly likeable or distinguishable, they are all just ciphers for the sectors they represent.

The action takes place in Mexico City but the anger is universal reflecting a world increasingly polarised between the have and the have-nots’. And the have-nots are certainly not having it anymore here in Mexico City which is seized by a violent uprising that boils over in the opening scenes. Patients are ousted from their beds and in a local hospital, and doused in green paint. Nearby a wedding is taking place behind the security-guarded walls of an upmarket compound: Marianne (Naián González Norvind) is getting married, but some of the guests arrive splattered in green paint.

The feverish pace quickens in the dizzying hand-held camerawork. A feeling of doom pervades. At the wedding the talk is of drugs and property deals, while the indigenous Mexican staff whirl around with champagne and canapés. Marianne is given envelopes rather than packaged gifts – money talks louder than toasters and crystal here in Mexico.  But when a former member of staff turns up asking his ex employer to finance urgent hospital treatment, Marianne is the only one to oblige, with a hug and a helping hand.

A scuffle breaks out and we are catapulted into a muddled, military-style coup. The staff grab jewellery and watches, while guests are bundled into black vans and dragged away screaming, under the cosh. Anyone travelling there will know that  guerrilla kidnappings are very much par for the course in modern day Latin America – but this is a big time operation, and it’s vicious, and well-orchestrated with no happy ending.

The Mexican flag flies high over the final scene that carries the chilling words ‘Only The Dead Have Seen The End Of War’ (purportedly a quote from the Spanish philosopher Jorge Ruiz de Santayana 1963-1952 not Plato – although this is debatable). Franco’s film takes no prisoners – quite literally – and there are no memorable performances, the characters are only there to serve the narrative. The takeaway is the powerful message New Order delivers. An unflinching and prescient work. MT