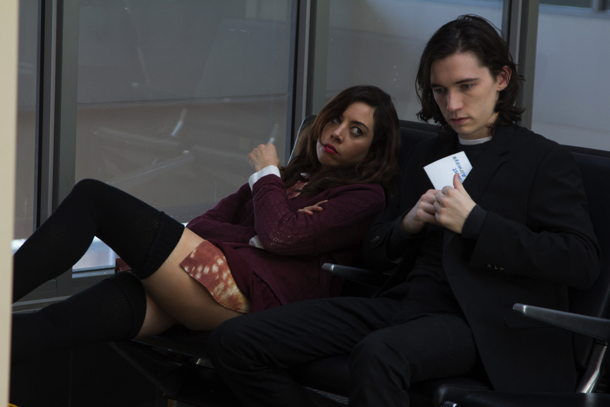 After disappearing from indie filmmaking for several years – during which he lived in Berlin – Hal Hartley is back on brilliant form with a deconstructed drama that’s fast-moving, deadpan and deliciously offbeat.

With regular collaborators including the sparky Parker Posey, Hartley completes the trilogy of HENRY FOOL that burst onto the scene in 1997 and continued with FAY GRIM a decade later. NED RIFLE sees their son Ned (Liam Aiken,a John Cusack doppel-ganger in both looks and style) embark on a journey to track down his father Henry (Thomas Jay Ryan) and kill him for ruining his mother’s life. Meanwhile, Fay is in prison serving a life sentence for her alleged ‘terrorism’ while Ned has been cared for in the community by a vicar (Martin Donovan) and proclaims himself a ‘chaste’ Christian.

Ned’s search starts in New York with a visit to his uncle Simon (James Urbaniak) who is learning to be a stand-up comic: “people want a good laugh occasionally, Ned, trust me”. But events are waylaid by the sultry and sexy Susan (Aubrey Plaza), who can only be described as ‘kooky’ – if you’re American, or if you’re European ‘distraite’ – and who fosters an obsession with his father that predates Ned’s arrival in the Grim family, or so we discover later. Ned makes it clear to Susan that he is not interested in a relationship but she tags along on the journey that leads them to Seattle (Hartley filmed this segment with local photos to keep the budget down) where Susan is increasingly desperate to get her paws on Ned – even sleeping in hold-ups and black underwear.

Performances are characteristically artificial and tongue-in-cheek with newgirl on the block, Aubrey Plaza, adding a certain foxy charm to the mêlée with her philosophical diatribes and smudgy red lipstick that drifts onto everyone’s cheek. Ned is given to hilarious religious soliloquys and is both appealing and convincing as a born again Christian. Hartley’s original score adds texture and a certain quirkiness to proceedings with its electric guitars that punctuate moments of drama. Fans will be delighted that the story finally finds a satisfying and amusing denouement, and there is much to enjoy in the acting and wittiness for those joining the party.

Hartley raised the finance (USD 400K) for his movie through a Kickstarter campaign and while the film may not get a theatrical release in the UK, there’s certain to be a DVD/VOD option on the way. MT