Bruce Dern won Best Actor at Cannes for his portrayal of Woody Grant in Alexander Payne’s sixteenth outing NEBRASKA. In common with all his features this is a dry comedy, and a road movie. But this time there is nothing to explore, nothing to find.  Anyone with ageing parents will appreciate the banal humour that can be found in simple exchanges between close members of a family who have grown up together and found their roles evolving from son to parent, lover to carer. Bob Nelson’s spare screenplay captures the caring, sympathy of David Grant (Will Forte) for his father’s predicament and the occasionally snarling ridicule that Bruce Dern’s Woody has for his youngest son. 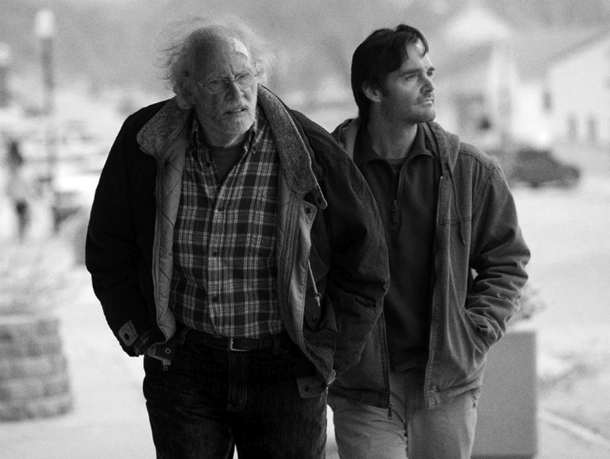 The vastness of the countryside and the broken emptiness of the towns during the journey from Billings, Montana to Lincoln, Nebraska are captured meticulously in the black and white landscapes: this not a journey into any future, but a glum portrait of the past and, in some ways, America’s past glory now reflected in the desolate urban spaces.  But also a lack of hope for the future, both socially and economically, as seen through the younger generation’s lack of real substance. And, like the main protagonist, the ageing alcoholic Woody Grant, this America is dying. The vastness of the abandoned land and the dilapidated streets and ramshackle buildings of small town America are dying a slow death. NEBRASKA is close to The last Picture Show, only even more moribund.

Woody is married to Kate, and their marriage is full of nagging (from her side) and blatant egoism from his. As Kate, June Squibb is hilarious without intending to be so and captivates with her strength of personality and self-belief. They live a small flat that looks like a night shelter. Sons David and Ross, are decent and kind men, the latter being more adjusted to modern life than his brother, who is in a dead-end job, can’t commit to his girlfriend and living in a bed sit that makes his parents’ place look grandiose.

Woody, like most men in his late eighties has reverted to a kind of childhood: hearing and memory are selective  – he stumbles around on the foothills of dementia – with a yen for booze. One day he gets hold of a flyer telling him that he has won a million dollars – he only needs to collect it with a company in Lincoln, Nebraska. Whilst Kate is dead against the idea; David, out of empathy and partly selfish reasons – agrees to take his father – hoping (in vain)  for increased bonding and a chance to get away from his own depressing life . On the way there they meet Woody’s family and friends in Woody’s hometown Hawthorne, Neb. Here David learns about his father’s youth, his trauma in the Korean War, and also about the greed of his so-called friends, lead by Ed Pegram (Keach), who suddenly remember vast amounts of money Woody’s them in the light of his prospective fortune. The money is a scam but the trip offers catharsis; laying bare all the hidden hopes, aspirations and desires between father and son.

NEBRASKA is never sentimental, the bleakness is unrestrained. It’s a world where parents have now proved more successful than their children in every way and despite a positive ending we know how short-lived that will be. The narrative is driven forward by sublime camerawork, intense images staying with us longer than the simple but rewarding plot. Acting veteran Bruce Dern as Woody is tough yet vulnerable and Will Forte’s David has just enough naivety to make himself believable and appealing. But the star is the camera. When panning over the presidents at the monument of Mount Rushmore, (looks unfinished – says Woody) we see a desperate yearning for a past long lost and a people interested only in religion, guns and cars. MT

NEBRASKA IS NOW ON MUBI