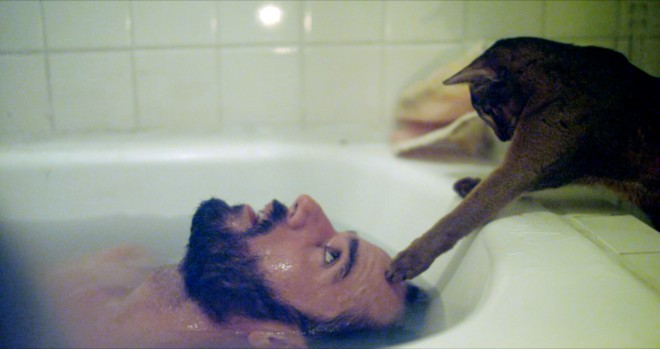 Sebastian Silva (Crystal Fairy, The Maid) treats us to a feel-good-movie about a gay couple trying to become parents with the help of their female friend – or does he?  Set in Brooklyn’s gentrified community of hipsters and would-be artists, Silva’s comedy of manners turns into a nightmare.

Mo (Adebimpe) and Freddy (Silva) would like a baby. Their best female friend Polly (Wiig) is only too willing to help out as her biological clock is ticking overtime. But Freddy’s sperm count is too low and Mo is at first reluctant to produce the sperm, driving the others crazy with his procrastination. Freddy is a would-be artist – like many in the neighbourhood – and tries to produce a performance act for a show, organised by a gallery; his contribution is called ‘Nasty Baby’, where Freddy and his friends take on the roles of babies – Silva lets no doubt arise about how embarrassing his ‘art’ is. When the trio travels to visit Mo’s parents outside New York, the friction between the hipsters from Brooklyn and the traditional lifestyle of Mo’s family becomes apparent in a repressed way – even though it spurns Mo on, to take the plunge. In a hilarious scene we witness the use of the full set of paraphernalia needed for artificial insemination. Whilst focussing on the would-be-parents, we may have overlooked a mentally disturbed character “The Bishop” (Cathey), who harasses people on the street; is clearly homophobic (attacking Polly for visiting the gay couple) and wakes the men up every morning at seven, using his noisy leaf blower – even though there are no leaves left. A friendly neighbour (Margolis) tries to mediate, but something in Freddy snaps, setting in motion a night in which he drags all his friends into a true Shakespearean drama.

Yes, in hindsight, there’s more than one sign of things to come – but hey, our trio is so lovable, that the audience is rooting for them unreservedly. Here we have the ultimate dream protagonists: a mixed race gay couple (with Mo being the peace-loving black teddy bear), a caring health worker (Polly) and lots of funny artist friends who might not do very much, but are so cool. What Silva is asking the audience to do is look behind the easy-go lucky facades presented to us: “It’s just an elitist group that can do and live a life like that. Most people in the world have to do a real job to make money, but in New York you have people doing the most whimsical things”. And he goes even further: “The film looks at how people are being displaced from their original homes, and displaced by rich kids buying everything. This film is a fable and lesson for these hipsters”.

Shot mainly with a handheld camera, DOP’s Sergio Armstrong’s images are truly chaotic, just like the lives of the protagonists. Everyone races around; permanent mobility is seen as a replacement for focus – the only exception is the Abyssinian cat who is more manhandled than petted by Freddy and, exceptionally for her species, not afraid of water – hence the cute scene in the bathroom), . The acting ensemble is impressive, particularly Wiig who tries not to show her vulnerability and emerges as a sort of “Alice in a (as it turns out) very troubled Wonderland”. AS