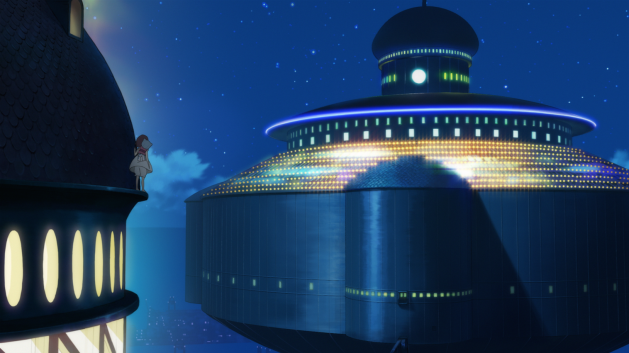 Director/writer Kenji Kamiyama (Ghost in the Shell) continues his critique of Japanese society with NAPPING PRINCESS, an Anime featuring Kokone, a teenage schoolgirl who has to clean up not only the contemporary world, but also a parallel world of sorcerers and monsters. Kamiyama makes impressive use of the Isekai genre – where protagonists have a double life in another world – showing that modern society is not that much different from other eras.

Instead of studying hard for her university entrance examine, Kokone (Takahata), regularly oversleeps and often manages on to fall asleep during lessons. In her vivid dreams, she believes that she is Ancien, the unruly daughter of the King of Heartland, who rebels against her car-obsessed father: every citizen has to drive a brand new vehicle, the production line is active 24/7. Workers are punished for lateness, even though the traffic is near to standstill. When Colossos, a giant mechanical monster appears, the King orders the building of transformer-likes machines which are pedalled from the inside by workers. Ancien, helped by the pirate Peach, makes full use of her magic powers, but is hunted down by the King’s evil mandarin Watanabe, who wants to exile the sorceress for good. Meanwhile, in the ‘real’ world problems also mount up: just before the opening of the Tokyo Olympics in 2020, her hipster father Kijita (Maeno), masquerading as a car mechanic, has finished the computer programme for pilotless cars, which will transport guest and athletes during the games. The programme had been started by Kokone’s mother, who had left her father, the CEO of a big car manufacturing company, who was then unwilling, to invest in pilotless cars. After the death of his wife, Kijita has completed the software program. The Watanabe-like Deputy CEO of Kokone’s grandfather’s company, now tries to usurp his boss, trying to lay his hands on the program. When Kokone realises, that Ancien is not herself, but her mother, she has another ally and can fight back successfully on both fronts, being also helped by her class mate Miori (Mitsushina).

Also known as Ancien and the Magic Tablet (much more appropriate than this rather silly title), Kamiyana connects the two worlds perfectly: the equivalent protagonists complementing each other’s characters to the full. But the main premise is that Kokone is a perfect role model: very much in love with technology, and adept and successful at using it, just like the male protagonists. She uses her emotional intelligence to deal with the opposite sex, who are unable to empathise. The only criticism of NAPPING PRINCESS is that the back-story is told over the rolling end-credits and not integrated into the main Anime.