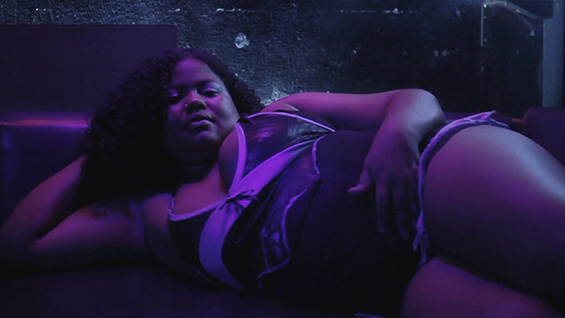 NAOMI CAMPBEL is the first collaboration between Chilean filmmakers Nicolás Videla and Camila Donoso and the debut feature of both. It screened at the 11th IndieLisboa in the festival’s long-standing Emerging Cinema programme, and its first screening proved very popular in the audience ratings (subsequent screenings are not voted upon).

On the outskirts of present-day Santiago, Chile, 22-year-old transgender woman Yermén (Paula Dinamarca) makes a living at Portal Tarot, an inbound call-centre that provides a fortune telling service. Aware that her wages won’t cover gender reassignment surgery, Yermén hopes to appear on a reality TV show, which could eventually earn her enough money to subsequently proceed with an operation. Undeterred by the bureaucratic process by which she must appeal for an op (which includes a series of Rorschach tests) and supported by older pal Lucha, Yermén remains optimistic about her immediate future.

Along the way, our protagonist ditches her neglectful boyfriend and meets an African immigrant who is herself seeking surgery – which will enhance her resemblance to Naomi Campbell. Named after such a narratively peripheral character (or, more precisely, her more famous surrogate), the film is a study of a certain milieu that promotes and feeds off the unattainable, from the glorification of size zero to the very consultancy provided by Portal Tarot. This is a society that alienates by way of seduction: it seduces the marginalised at the same time as denying the fulfilment of the very desires enabled by it.

The film is visibly documentary-like at points. Like its protagonist, it straddles the liminal space between two established codes with conviction and purpose and without self-pity or sentimentality. Most obviously, the film evinces a diaristic feel in those recurrent passages in which Yermén handles a lo-fi digital camera, depicting (for example) local canines that bark but don’t bite: “Just like men,” she says repeatedly and venomously, implying unacknowledged emotional wounds. Indeed, it is in such sequences that the otherwise inscrutably dogged Yermén’s vulnerability (as well as a palpably dormant torment) leaks through. At a decisive moment in the film – and in a rare instance of verbalised feelings – Yermén looks at a portrait of her deceased mother: “I miss you so damn much comrade.”

At other points, the filmmakers appear to capture the very real social layers amidst which their film is set. Early on, we eavesdrop on elderly neighbours’ prejudiced gossip, almost to camera, about Yermén’s gender. Later on, the film resembles an ethnographic study: nothing screams urban poverty like an image of two stray dogs mating in the street as locals walk by on their daily grind. In such scenes, Matthías Illána’s cinematography lends an authenticity of place that only anchors the story.

Despite the odd occasion of arthouse ambiguity here – such as that when we cut from Yermén peeling potatoes to a shot of her lying on the kitchen floor, in apparent shock-cum-paralysis – NAOMI CAMPBEL compellingly boosts its central drama with a subtly woven, more symbolic current. (Yermén’s idiosyncratic sense of humour also helps.) Indeed, in essence the film is about one transgender woman’s negotiation of an overly masculine world driven by ever-shifting masculinities – masculinities that are undergoing continual crises due, no doubt, to the changing shape and declining appearance of global labour relations.

One such masculinity is found in the propagandistic images of an incessantly action-packed war movie, which we see casually playing on a television set in the waiting room as Yermén awaits a consultation. Another is encountered when Yermén’s boyfriend suggests during sex that she fuck him from behind. Horrified by the thought of using the one organ she is hoping to have removed, her objection is an amusing and telling statement of anti-genderisation. Michael Pattison

INDIELISBOA runs until 4th May 2014 in Lisbon, Portugal