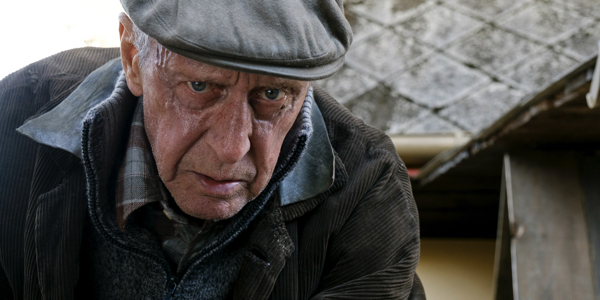 This darkly amusing social satire premiering at this year’s TORONTO FILM FESTIVAL is the third outing for actor turned director Karl Markovics who is also turning out to quite a talent behind the camera winning awards at Cannes, Sarajevo and Zurich for his features Breathing (2011) and Superwelt (2015).

Stunningly captured on the wide screen and in crisply shot close-up his latest NOBADI has quite a few surprises up its sleeve in a story that seems at first like a less ambitious version of The Interpreter – two characters come up against each other from across the divide – but this moral fable soon takes a much darker direction plumbing the depths of the immigrant crisis for one young man from Afghanistan.

A pithy and sardonic script and a steely central performance from veteran Austrian actor Heinz Trixner make this a winner. He plays a curmudgeonly old buffer Robert Senft who grudgingly employs a desperate manual labourer down on his luck to help him dig a hole in his back yard to bury his dead dog. After beating him down on his hourly rate, he agrees to pay a measley three euros to the well-mannered Adib (gamely played by newcomer Borhanulddin Hassan Zadeh). But as works starts the old man’s character is revealed in all its complexity. Meanwhile Adib comes across as decent and biddable. But what happens next is both unexpected and tragic allowing Markovics to make some subtle but light-hearted digs at the sad state of affairs in his native Austria. MT