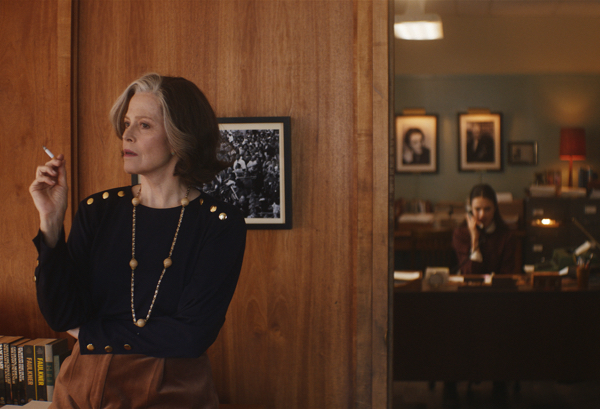 Most people have heard of Catcher in the Rye and its intriguing author, J D Salinger. Canadian filmmaker Philippe Falardeau choses to focus on the 2014 memoirs of Joanna Rakoff who served served as an intern to Salinger’s literary agent, and Sigourney Weaver does her utmost to breath life into her character in this rather flaccid adaptation of even though she gives its a certain a damn good try.

My Salinger Year – now renamed  My New York Year – presumably to give it a push into more mainstream audiences – run along similar lines the The Devil Wears Prada without the chutzpah: country girl goes to the city and is given a jolly good hiding by an urbane sophisticate, triumph and then to move on. Joanna has to deal with the writer’s fan mail, with a concise and polite generic response.

Margaret Qualley plays Joanna, the college graduate in question, as socially gauche but spunky enough to snare this rather plumb job that puts her in phone contact with the urbane novelist, but gives her a rough ride from the mercurial Margaret who enjoys upstaging Joanna and toys with her like a cat with a mouse. We are treated to dramatised excerpts from the rather idolatrous fan letters, and a subplot involving Joanna’s love interest Don (Douglas Booth) and her trials and tribulations of being a newcomer in the New York metropolis.

The problem here is really Falardeau’s lacklustre script that doesn’t stoke the kind of incendiary sparkle Anne Hathaway shared with Meryl Streep in Devil. In fact, quite the reverse happens here and the writing – faithful to the introspective nature of Rakoff’s page memoirs – represses the women into a dignified torpor rather than feisty fun and repartee. And we experience nothing of Salinger himself – after all the most intriguing character – not only for literary fans but anyone who has vaguely heard of the book. MT