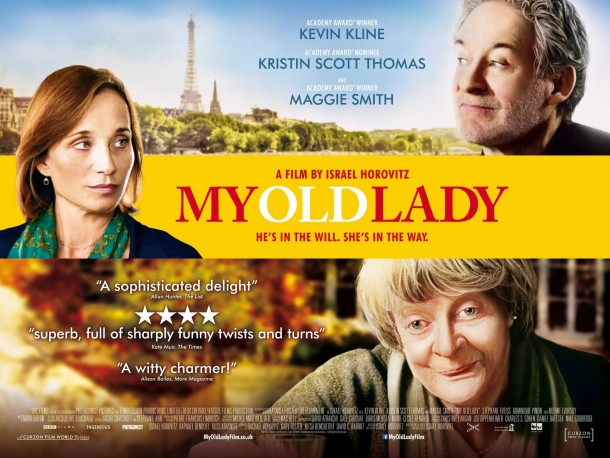 Israel Horovitz has written over 50 plays. He makes his directorial debut here with an adaptation of one of them, a wittily-observed comedy drama that explores the vagaries of family relationships through the joint ownership of an apartment in Paris. It stars Kristin Scott Thomas, Maggie Smith and Kevin Kline as the family members.

As Mathias Gold, an impoverished New Yorker, Kline arrives in the French capital to claim an inherence from his father: a plush apartment in a chic part of centre Ville. Chipper at the thought of solving his financial problems, he lets himself in to discover the elderly occupant, an English woman in the shape of Mathilde Girard (Maggie Smith): “I’m ninety, subtlety is not something that interests me”.

Mathilde explains that the apartment is a ‘viager’, which in French property terms means that his father has acquired it from Mathilde at a decreased value, subject to a monthly rental payable to her and allowing her secured tenancy until her death. In other words, the flat is a poisoned chalice. But providing she dies before Mathias does, it reverts to him, permitting a sale. So Mathias must pay 2,400 euros to Mathilde and her daughter, Chloe (Kristin Scott Thomas), who he later surprises in the unlocked lavatory. Mathias is forced on a steep learning curve to bone-up on the arcane laws of French property while ingratiating himself with his intransigent new landladies.

All very awkward but therein lies the edgy humour: Kevin Kline is forced to eat humble pie while still keeping his end up and his eye to the main chance. In a racy performance of suave aplomb, he manages to maintain control of his faculties, manoeuvring himself deftly towards a satisfactory modus vivendi while also hustling for the rent by discreetly selling some of the furniture. He makes a firm friend and ally of local estate agent, Monsieur Lefebvre (Dominique Pinon) and also keeps negotiations on the boil with a wealthy would-be buyer on his own account. Mathias is a character who is both flawed and pathetic yet strangely masterful in his manipulation of the two straight-laced Englishwomen, who are themselves no fools. Mathilde in particular, is shrewdly crafty and Maggie Smith portrays her with a touch of class and her usual hard-edged charm.

In a tricky role, Kristin Scott Thomas injects brittle unpleasantness into her frustrated middle-aged portrayal of Chloe, an English teacher who is physically attractive but emotionally flawed by Mathilde’s selfish form of motherhood. At times, the dynamic between Chloe and Mathias feels strained, but understandably so, given the circumstances of their past and as they move towards a deeper understanding of one another, a tragic secret is gradually revealed, amid much soul-bearing. What they achieve in this highly complex interaction is skilful and believable.

Throughout, the stoical Mathilde remains discretion personified despite emerging as rather a snake, although a charming one, nonetheless. Some poignant emotion seeps through the cracks of this enjoyable comedy drama that manages to retain an authentic feel, despite its slightly bizarre conceit, and never takes itself too seriously. MT