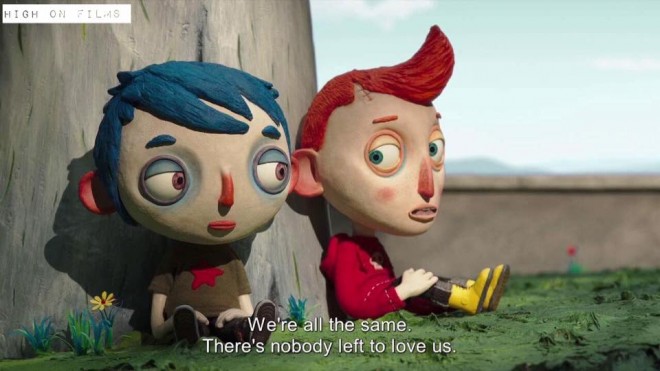 Claude Barras’ stop-motion animation is a tender tale probing life’s saddest moment: not a kid’s film but one that resonates with the kid inside us – Heart-breaking and uplifting at the same time. Celine Scammia (Water Lilies, Girlhood) an expert on juvenile psyches, has cleverly scripted Gilles Paris’ autobiographical novel Ma Vie de Courgette, and although the film is not as dark as the book, Barras’ characters have to deal with considerable trauma, making it only suitable for the over-tens.

The story of nine-year old orphan Courgette (his real name is Icare, i.e. Icarus) is completely different from other child-themed animations Mathilda or Annie. Courgette himself has killed his alcoholic mother accidentally; he keeps one of her empty beer cans as the only memento of her life. A friendly policeman Raymond takes him to an orphanage where he meets look-alikes, who share his displacement: the faces of all the children seem to be made out of plasticine, they have a mop of coloured hair – in Courgette’s case –   huge blue hands, and golf-ball sized eyes, with the iris looking as if it was stuck on. These eyes really are mirrors of their souls, pictures of their state of mind. And despite the slender running time, David Toutevoix’ delicately rendered images convey the passing years as the orphans develop seamlessly from children to gawky pre-teens. Initially the colours are muted, particularly in Courgette’s flat, where he hides in the attic to avoid his dipsy mother. But as life improves the visuals lighten and colours become more vibrant.

When Courgette enters the orphanage he is immediately accosted by the loutish leader of the pack, Simon, who calls him ‘potatoes’; whilst the dinosaur-obsessed Ahmed becomes more of a soul mate. Alice, always shy, hides behind her hair which she parts like two curtains over her face, when embarrassed. But Courgette falls for Camille. When Raymond re-appears, he takes the two children to his flat cacti-ridden flat. But then Camille’s money-grabbing aunt takes over: she feels nothing for her niece but wants to collect the grant for raising her. But Camille and Courgette find a way of being together.

Courgette is a sensitive study in grief, but also an authentic portrait of children growing up, coming to terms with their sadness and becoming sociable beings who have learned to look out for each other, like Simon who encourages Courgette and Camille to live with Raymond, even though they are sad to leave him behind. Barras and Sciammia create a wonderful cosmos of healing: symbolised by the children using a weatherboard for their moods: ‘Cloudy’ turning more often to ‘sunny’ than not. AS