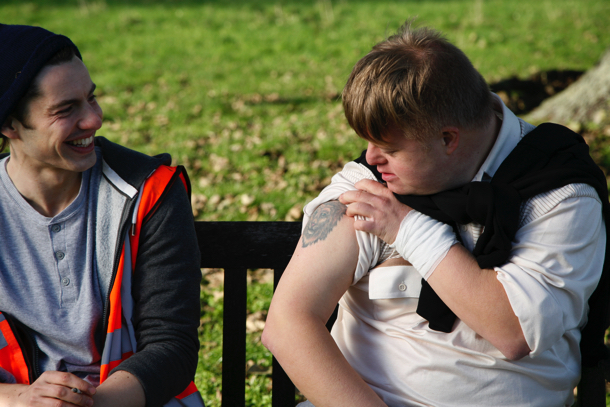 Steven Brandon makes an impressive screen debut in Jane Gull’s heartfelt care home drama MY FERAL HEART. He plays Luke, an empathetic young man with mild Down’s Syndrome who, despite his own heath concerns, becomes a positive asset to the inmates of Blossom House care home where he is transferred after the death his bedridden mother (Pollock), whom he cared for with great tenderness. Struggling to come to terms with his new environment, Luke befriends teenager Pete (Rastall), a gardener with a troubled past and a feral girl (Le Knot), who has been caught in an animal trap, nursing her back to health. Brandon carries the film with his understated performance, best shown in his scenes with Peter, which are a tribute to those suffering from borderline mental and physical impairment. Although Gull’s care home appears to be idyllic, she directs Duncan Paveling’s script with sensitivity and maximum emotional impact, Gull avoiding all sentimentality. DoP Susanne Salavati, also shooting her first feature, flips seamlessly between realism in the care home and the natural beauty of the surround countryside making MY FERAL HEART humanistic and engaging in its consideration for vulnerabilities on many different levels. AS/MT

SCREENING DURING THE EAST END FILM FESTIVAL ON 28 JUNE 2016