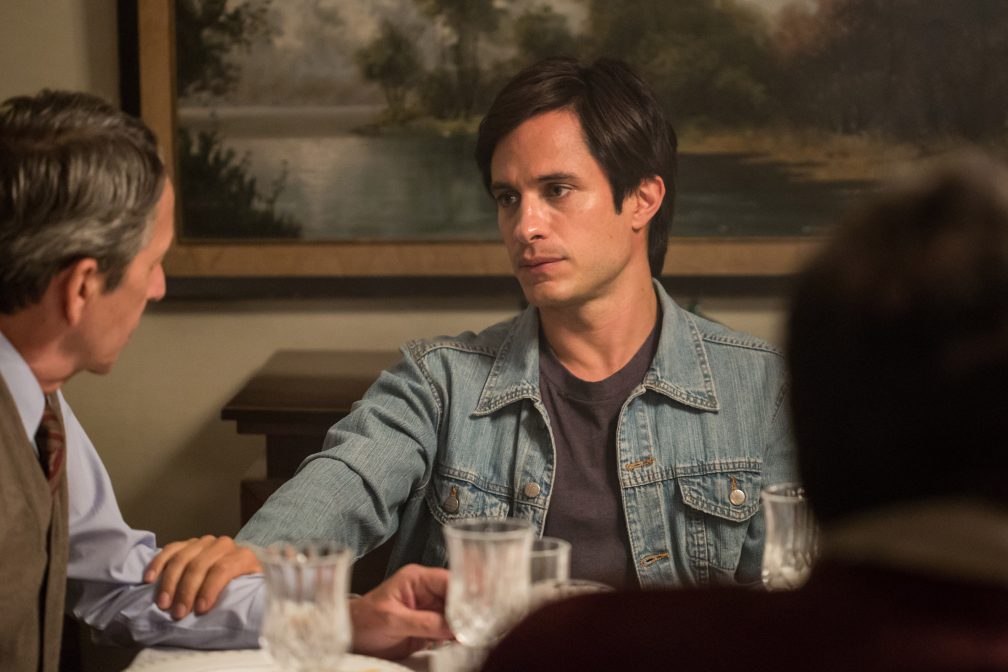 In Alonso Ruizpalacios’ follow-up to his punchy debut Gueros, two wayward young Mexicans from Satellite City are bored with their provincial life so decide to rob the local archeological museum of its Mayan and After treasures in an offbeat but strangely captivating drama that gradually gets more entertaining, although it never quite feels completely satisfying, despite some stunningly inventive sequences and three convincing performances from Gael Garcia Bernal, Simon Russell Beale and Alfredo Castro (The Club).

And it’s largely down to local Mexican incompetence that these two amateurish dudes (Bernal/Ortizgris) get away with their heist in the first place. But what starts as a so-so domestic drama with the same aesthetic as No!, slowly starts to sizzle with suspense as the director deftly manages the film’s tonal shifts to surprise and even delight us – this is a film that deserves a watch for its sheer wakiness and inventive chutzpah.

It all starts in the early 1970s when Mexico’s rich heritage is being transported from original sites to provide interest in a brand new modernist museum in Satellite. During the Christmas holidays the two sneak away from their families and – in a terrifically tense robbery scene – slowly steal their plunder and make off through ventilation ducts when the alarm finally kick in. One of surreal effects is that Bernal imagines a vision of Pakal, a Mayan king, at the end of the tunnel.

Amazed at how easy it all was, the naive pair then set off to the Mayan site of Palenque to start liquidating funds through their various sources. On the way, they even get through border patrols who are more interested in Bernal’s celebrity (this is all part of Ruizpalacios and his his scripter’s quirky script). But their first hopeful Bosco (Bernardo Velasco), gives them the bum’s rush and they swiftly move on. Acapulco beckons and Simon Russell Beale’s vignette as a wealthy dealer is one of the scenes to savour, adding a certain upmarket whiff to proceedings, and the boys gets their knuckles rapped for wasting his time, retreating to a sleazy  nightclub and more playful fun – thing time involving Sherezada Rios (Leticia Bredice/The Difficult Life of an Easy Woman.

Bernal plays it all with gusto in a role that sees him flipping from sweet-talking swindler to foolhardy fantasist when he switches off the headlights of their fast-moving car.

Quoting American shaman Carlos Castaneda, he indulges in some very Mexican fantasies about death, invincibility and warriorhood – then stupidly acts them out by switching off his headlights on a pitch-black highway. But reality finally bites in the satisfying denouement when he crashes down to earth with a clip round the ear from his father (a grave Alfredo Castro) forcing him to face his demons, and not only the ones he has stolen. MT