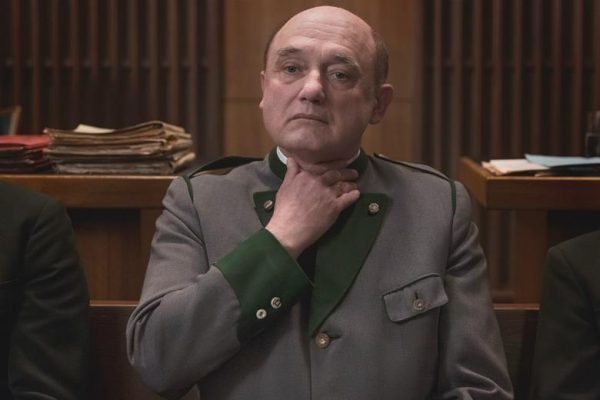 Austrian director/writer Christian Frosch (Rough Road Ahead) captures the cumulative intensity of the trial of his compatriot SA Oberscharführer Franz Murer (1912-1994), commandant of the Vilnius Ghetto from 1941 to 1943, which was held in Graz in 1963.

Known as the “butcher” of Vilnius, Murer was known for the sadistic killings during his watch on the liquidation of the Vilnius ghetto once ‘home’ to over 80,000 Jews, only a few hundred lived to tell the tale. After the war he was spotted by accident by one of the survivors, and stood trial in the USSR, where he was sentenced to 25 years for the killings of the Soviet denizens. In 1955, having only served six years of his sentence, he was repatriated as part of the Austrian Treaty which re-established the country of Austria after ten years of rule by the Four Allies. One of the conditions for his release was that he be re-tried in Austria. Only thanks to Simon Wiesenthal, this finally happened in 1963.

We are introduced to Murer (Fischer) and his wife Elisabeth (Ofner) on the first day of the trial: they kiss passionately in his cell, before his lawyer Böck (Fennon) makes an entrance, insisting Murer wears an old traditional jacket instead of the expensive coat chosen by Elisabeth. Clearly Böck is trying to make Murer look like an Austrian Everyman; the victim of Jewish propaganda. But Murer is anything but: it is rumoured that he stole gold from the ghetto finances, paying for the large agricultural holdings he then acquired. He is also a well-known regional member of the governing Austrian People’s Party.

Prosecutor Schuhmann (Jaeger) is no match for the defence lawyer, who uses every trick in the book to discredit the Jewish witnesses, accusing a father of lying when he witnessed his son’s murder at Murer’s own hands: “This was a case of mistaken identity, Jewish people under orders of Wiesenthal and other Zionists, do not care if they accuse the wrong person, as long as it is a German or an Austrian”. Murer’s defence is helped by a particular witness, Martin Weiss (Veit), De-facto commander of the ghetto, who then takes responsibility for the boy’s killing. Oberscharführer Weiss, member of the ruthless Einsatzgruppe 3 and the SD, was responsible for the massacre of Ponary, where 100,000 Jews and Communists were shot. He was convicted to a life sentence in West Germany in 1950, which was first suspended in 1970, then revoked in 1977. Like Murer, Weiss would live well into his eighties.

Judge Peyer (Forberg) is clearly seeking ‘a non-guilty’ verdict, his own murky past makes him inclined to “be lenient on people like Murer, who have repented – if we don’t show mercy to people like him, what do we do with the hard-core Nazis?” He is joined by the majority of the Graz citizens, who throw stones through the window of the restaurant where the press, the Jewish witnesses and Simon Wiesenthal (a brilliant Karl Markovics) are being hosted. Frosch establishes Murer as “an ordinary man of evil”, whose supreme arrogance in the face of guilt is backed up by the huge majority of Austrians, not only his own town folk. It is not only the verdict which proves him right: Until June 2019, when an interim government took over from the discredited OVP/FPO coalition, as well as in the post-war past, the right wing “Freedom Party of Austria (FPO)” formed part of the government, their Law makers helping to deny the country’s questionable past.

DoP Frank Amann’s mobile camera brings the trial to life, avoiding a static pot-boiling drama, which runs for over two hours. That said, this is much more than a historical trial: its showcases a contemporary history in Europe where  countries like Austria, who participated in the Holocaust, but never owned up to their culpability, are now creating an ideal environment for the resurgence of Fascism by forming an alliance of denial at all cost. AS