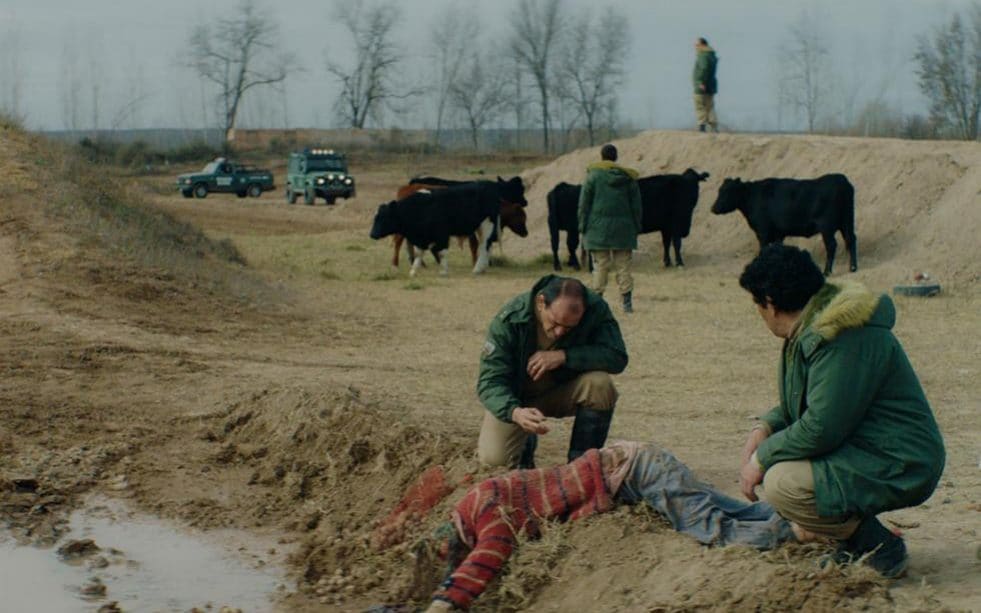 Murder Me Monster’s widescreen solemnity might bring to mind the murder investigation in Once Upon a Time in Anatolia – and there are vague echoes of Amat Escalante’s The Untamed, but that’s where the similarity ends. This brooding Andes-set crime mystery is the gruesome work of Los Selvajes director Alejandro Fadel, and it is certainly not for the feint hearted with its bestial themes and deformed zombie-like characters. Infact everyone in this stomach-turning horror fantasy is on edge and whispering morosely, for one reason or another. And a series of macabre murders, where heads are torn from bodies, seem to be the reason why.

The opening scene sees the dying moments of a woman whose throat has been severed. As a herd of sheep and some other livestock are slowly make their supper of her remains, a blind man mumbles on about the murder. A feeling of unease creeps over proceedings when it transpires that the bloodshed is connected to a feral beast on the prowl and out of control in this desolate and remote corner of Argentina where the sun rarely shines.

Rural police officer Cruz (Victor Lopez) is tasked with investigating the murders and the finger seems to point to local thick-lipped weirdo David (Esteban Bigliardi) who claims that a savage creature is using certain phrases to commune with him, as if through telepathy, with a ‘silly’ voice that repeats ‘Murder Me, Monster’.

Cinematographers Manuel Rebella and Julian Apezteguia evoke nightmarish visuals often using the same technique as the painter El Greco – where the characters’ faces are often starkly backlit against a murky darkness. There’s a garish otherworldly quality to the outdoor mountain scenes in a film that takes on an increasingly Lynchian feel as the plot thickens. Pus-yellow, murky mustard and puke green make up the colour palette of costume and set designers Florencia and Laura Caligiuri. An atmospheric ambient score keeps the tension brewing.

This is intriguing stuff, if rather too enigmatic for its own good, eventually leaving us stranded in its own mysterious backwater. This study of fear and perversion in a Pampas backwater will certainly made you feel nauseous and bewildered by the end. MT