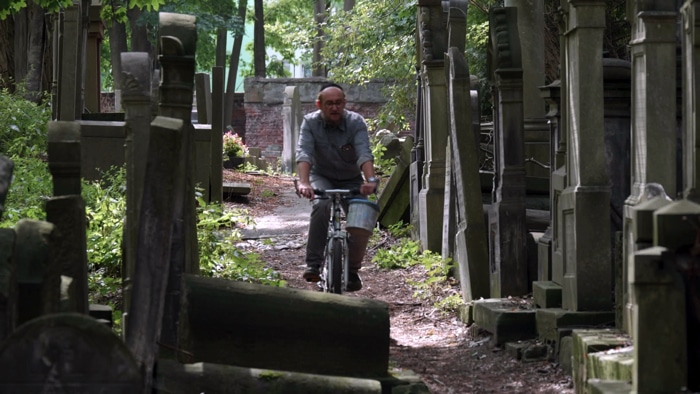 This haunting documentary debut from Isreal’s Chen Shelach, explores the traumatic past and present of Warsaw’s Muranow, once home to 200,000 Polish Jews before their lives were destroyed in the ghetto, the largest in the nation state that was ‘Greater Germany’. The vast majority were deported to Treblinka death camp where they were murdered in broad daylight.

But Muranow also tells another tale: of the Jewish uprising that took the ghetto by storm – and of those who live there today, still  traumatised by the ghosts and demons of their past – but who still deny their fellow citizens collaboration with the Germans.

And the ghosts and demons are still very much alive, according to one flat dweller whose refurbished property adjoins the Muranow cemetery. She claims no one will drink her tap water because the ground below the pipes still contains traces of Jews who lost their lives in the tragic years between 1938-1945.

Only two of buildings have survived the war and Muranow’s subsequent urban regeneration: One houses the Warsaw University’s Psychology department which once was the SS HQ. The other is St. Anne’s Church, where the SS hid paintings and other valuables looted from Jewish homes. Researcher Mattan Steffi contrasts old archive films and photos with today’s modern version of Muranow. The current Polish inhabitants of the quarter are well aware of this gruesome and guilt-ridden past. When interviewed they hide behind lame excuses – even though one of them moved out to Gdansk for two years on account of the ‘ghost’ in his flat – whom he Christened Rachella. Another woman bought a Menora, to fight off the ghosts “from a lost civilisation”. The existence of the ghetto is a taboo subject in schools.

The modern worlds collides too: A Lebanese baker tells about his family’s flight from the Middle-East war zone to Warsaw – and is shocked to learn that he’s actually living on the Nazi genocide victims’ bones.

Then there are the young Zionists from Israel, who visit the bunker where the Jewish Uprising’s victims committed suicide. They are proud of their slaughtered ancestors “you died with pride, so we can fight with pride for Israel”. A commentator is rather forgiving of this failed analogy: “Young people always need a story with a Happy-End.” The Polish authorities work hard to create an image, picturing Jews and Poles as victims of the Nazis alongside each other.

There are demonstrations in Muranow, but these only show how the Holocaust has been hijacked for a new Polish Nationalism: “Poland for Poles only” sing these neo-fascist on Muranow’s highway and byways. Meanwhile bookshops stock titles such as “Zombie Jews Living in the Underground”. Muranow’s new residents are often “sad about what happened to the Jews, but not so sad as to move away” – many still benefit from this Jewish legacy, and live in fear of the Jewish returning to reclaim their land and property.

One collective tries to recreate the Muranow old town with the help of 3D films, creating parallel versions of the old and the new. One writer is making a film about this Ghetto between 1940 and 1945 using a German 16 mm camera dating back to 1935. Mattan Steffi ‘feels’ the bodies under the pavement. The director and writer claim the guy ” is crazy in the head” – but are proud of his obsession with the past nonetheless.

With DoP and producer Micha Livne delivering stunning images of the old and the new, this is a perfect passion project. The saddest point is perhaps the Poles collective denial of what happened. It seems they’ve learnt nothing from history. People never learn. The ghosts and demons are possibly their own projections of a guilty conscience. No one can escape their history – no matter how hard they try.  AS