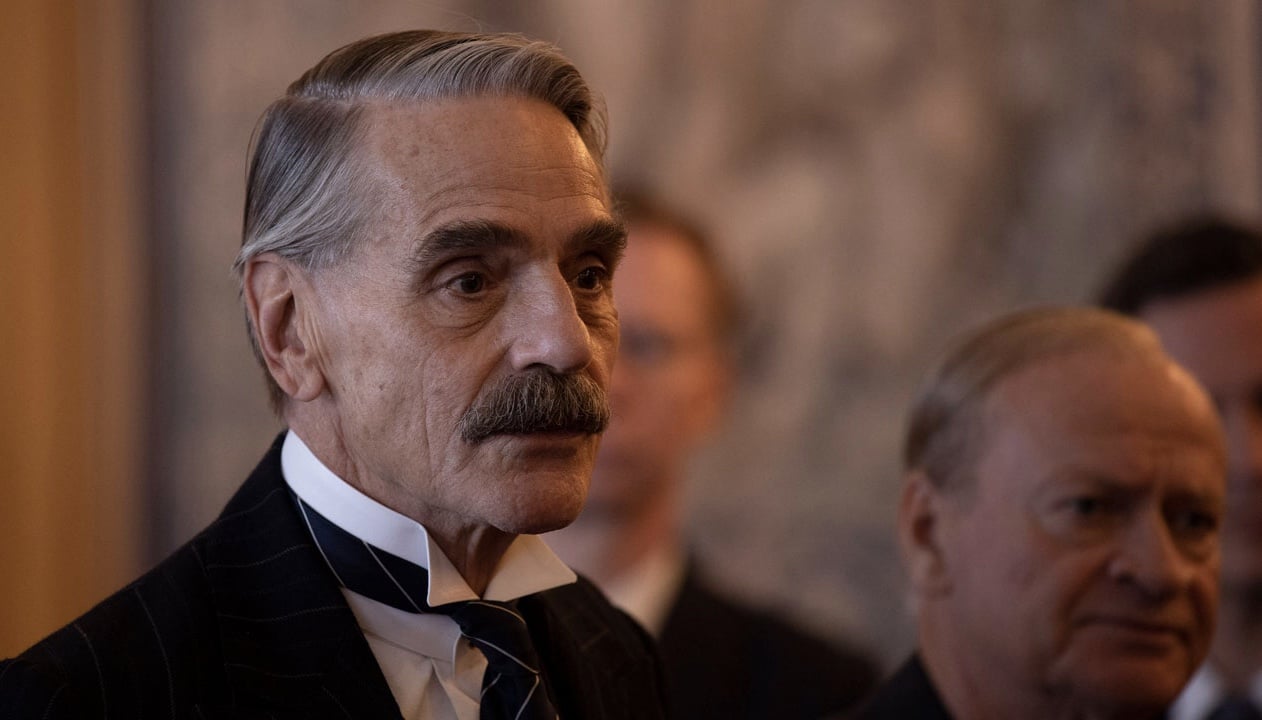 German director Christian Schwochow – perhaps a surprising choice – directs British playwright Ben Power’s adaption of Richard Harris’ 2017 bestseller as a lively mixture of personal and political conflicts. Schwochow takes on board the strengths and weaknesses of the novel: the need to suspend reality is better suited to the cinema than the written page: but it’s an entertaining romp, even hair-raising at times with with a brilliantly sensitive George MacKay and Jeremy Irons the gallant stars.

German Paul von Hartmann (Niewöhner) and Englishman Hugh Legat (MacKay) meet in the early 1930s at Balliol, Oxford, later falling out over Hitler’s’ racial policies. But they are forced to bury their differences and pull together when British Prime Minister Neville Chamberlain (Irons) heads to Munich to sell out Czechoslovakia in the Autumn of 1938. He soon finds himself in a race against time to prevent war. His personal secretary Legat and German underground agent Hartmann are hellbent on stopping Chamberlain’s appeasement politics, well aware that the German Army would putsch against Hitler, if Great Britain and France were to take up arms in the event of a German invasion.

Chamberlain and the French Premier Daladier are determined to accommodate Hitler’s demands, not even bothering to invite a Czechoslovak delegation to Munich, instead it is Benito Mussolini who has a staring role at the conference. Meanwhile Legat has marriage trouble, his wife Pamela (Brown Findlay), resents Hugh’s workaholic life, Von Hartmann on the other hand is putting his life on the line by having a torrid affair with co-conspirator Helen.

Although Chamberlain is briefed on a secret document outlining the imperialist goals of the Third Reich, he is adamant that avoiding war is the only way forward with Hitler, he even goes so far as to have the infamous “Peace in our Time'” note signed by Hitler himself, ignoring advice that the piece of paper is just that. Nobody was prepared for Hitler to take a shine to his stand-in translator Von Hartmann. In a pivotal moment, which could change the course of history, Paul finds himself alone in a room with Hitler (Wuttke), a loaded revolver hidden behind his papers.

Jeremy Irons steals the show as Chamberlain, an ageing supremo more suited to the gentlemanly decency of Victorian England, he now sees his friends being killed in the trenches while dealing a psychotic upstart who shares none of his gallant concepts of honour and gentlemen’s decency. Ironically Chamberlain would go down in history as the man who helped Hitler turn against Europe.

DoP Frank Lamm uses the wide screen to brilliant effect (shame that the feature is destined for the small screen of Netflix). So despite underlying flaws Schwochow delivers an exhilarating political thriller of the first order vaunting triumph over adversity. AS