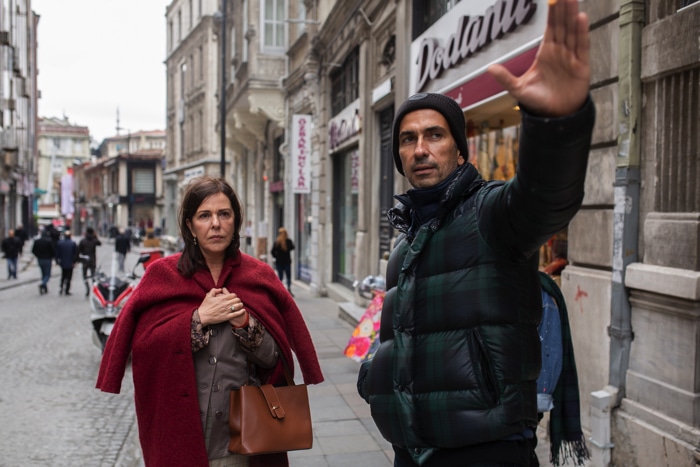 MUJDE shines a critical light on Turkey packing a pithy story into an hour unlike so many features nowadays that drag on interminably relying on atmosphere to carry a paper thin narrative.

Recently widowed Mujde (a brilliant Lale Mansur) rightly suspects her son Okan (Kurucan) and his estate agent friend Berat (Bilge) of having ulterior motives in persuading her to sell the large family house and move to a poky flat in central Istanbul. But she goes ahead nevertheless and employs three Syrian immigrants to help with the move. One of the them, Sayyid (Kechiouche), has lost his son in the Syrian conflict, and his vulnerability leads to romance with the lonely widow. The two make an odd couple, Mujde’s friends disapproving either on the grounds of jealousy or general hostility towards Syrian immigrants who are seen as second class citizens by the local Turks. An unexpected turn of events leads to tragedy on Shakespearean proportions when Sayyid is called back to Syria leaving Mujde in the lurch.

Set amongst Istanbul’s colourful shops and bazars and domestic interiors that bring to mind Fassbinder’s Fear eats up the soul, Mujde is an affirmation of contemporary cinema, proving a strong script is still central to successful filmmaking. Best known for his critically acclaimed drama The Long Way Home (2013) Alphan Eseli is also co-founder of the Art and Culture platform ISTANBUL’74. AS