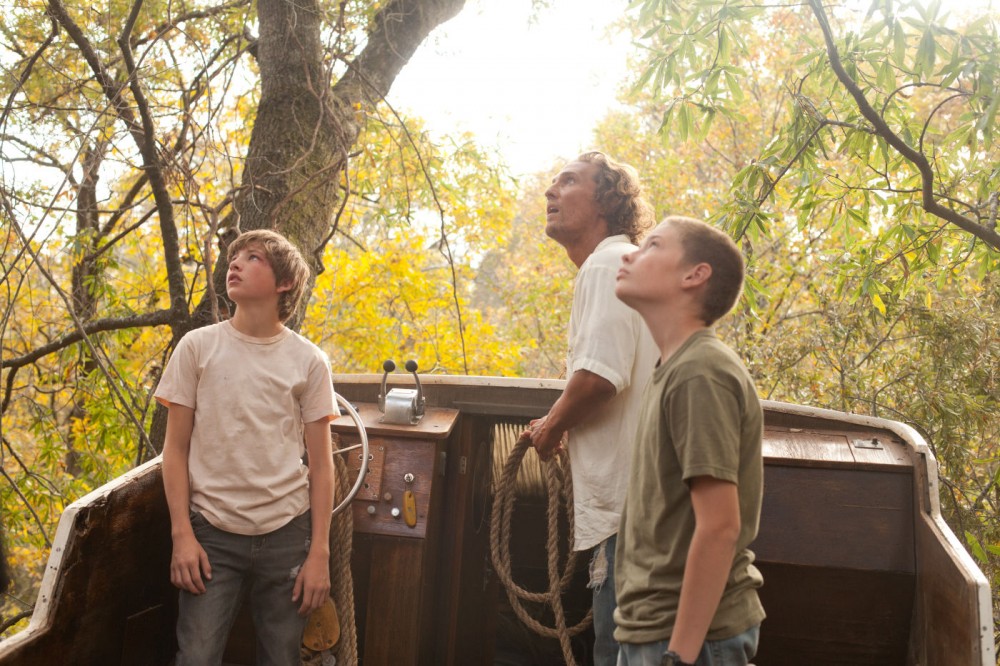 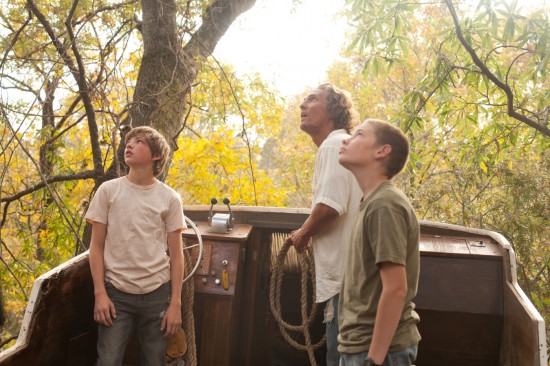 Jeff Nichol’s story of a likeable but mysterious loner (Matthew McConaughey) who bonds with two young boys in the deep south  has much to recommend it in terms of gripping drama, adventure and strong performances. It’s also a beautifully told love story with a ring of ‘Huckleberry Finn’ to it, imbued with palpable swampy heat and Adam Stone’s lush and scenic visuals.

The story surrounds a group of characters who, for some reason or other, appear to be broken or down on their luck. Teenager Ellis (Tye Sheridan) is worried and insecure over the likely divorce of his parents. His best friend Neckbone’s, (Jacob Lofland) parents are no longer around and he’s looked after by his fisherman uncle in a characterless and poverty-stricken town.

While playing around near an island in the Mississippi, the boys stumble across an old boat which is the secret home to the raddled and sunburnt “Mud”(Matthew McConaughey) who appears to be in hiding after killing a man during a argument . Somehow, maybe because of Mud’s genuine remorse over his past ways, this doesn’t seem to register in the collective consciousness of the boys who are more interested in the the boat and readily help Mud, feeding him during visits to and from the town rather than reporting him to the local sheriff.

Ellis is a sensitive character played here by newcomer Tye Sheridan. He portrays a self-possessed boy with wisdom and stature way beyond his years giving him the maturity to attract an older girlfriend. He is by far far an away the most most impressive character in the piece, commanding respect yet retaining his childlike vulnerability. He’s also a well drawn portrait of disappointment and despair. Mud confides in him and asks him to get in contact with his ex (Reece Witherspoon) in the hope of patching things up with her. He also asks them to commit a small crime which they gladly do on his behalf, such is their trust in him. Naturally events dont go according to plan.

Matthew McConaughey and Reece Witherspoon give the best performances of their careers to date as star-crossed on/off lovers with a difficult past. Reece Withersppoon is convincing and serious in her role as Mud’s trailer trashy ex, who’s nevertheless worthy of respect and not going to be hurt a second time. Sam Shepard is also strong as Mud’s shady father figure, who also has a sketchy and not all together straightforward past. MT