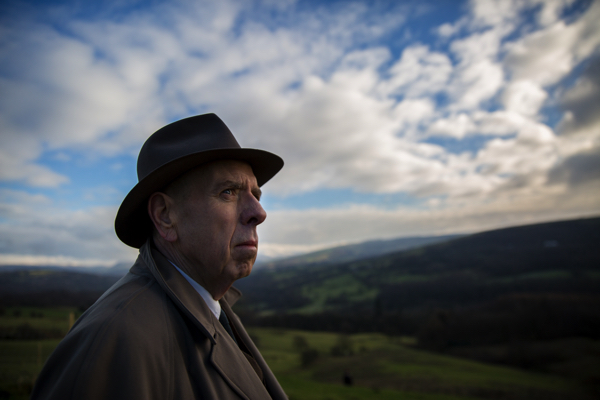 Director Adrian Noble cut his teeth in theatre and was artistic director of the Royal Shakespeare Company from 1990 t0 2003. Mrs Lowry & Son is adapted from Martyn Hesfords’ script, based on his own stage play about L.S. Lowry (1887 – 1976)  It is perfect portrait of how a mother can stunt her son’s confidence irrespective of talent. Vanessa Redgrave plays the mother in question with waspish defiance. But Lowry (a thoughtful but dogged Spall) toughed it out to become a major British figurative and landscape painter best known for his iconic ‘matchstick men’.  He still holds the record for the most honours declined: a knighthood, a CBE, OBE and CH.

Set in 1934 the focus is a maudlin episode of Lowry’s middle age (he was 47 –   although Spall is, and looks, much older) when he is forced to look after his mother Elizabeth in a humdrum house with an outside latrine and curtain-twitching neighbours in Pendlebury, on the outskirts of Manchester. Elizabeth is still very much in charge in spite of being frail and bed-ridden. A former teacher, she had hoped for a more glamorous career as a pianist but this never materialised mainly because her husband has recently died and squandered all the family money. As such the film feels like more like a pinched but accurate description of the disillusioned life and pettiness of an elderly Provincial woman during in the interwar years, harking back to a glorious past in the leafy suburb of nearby Victoria Park (Elizabeth Gaskell and Emmeline Pankurst were neighbours). Meanwhile, Lowry is trying to gain recognition as an artist, but is saddled with the shame of his father’s debt and is forced to work as rent collector. Painting is his way of escaping this miserable existence and he finds a kind of happiness and contentment there, painting between ten and two at night, in his little attic studio. Lowry sees beauty in this industrial wasteland outside his window.“Hope gets a lot of people through life” he ruminates philosophically but there is also despair peeping through the rain-filled clouds: “None of us is free. We are all captured in a picture, a stranger to everyone else”. Hesford’s script does have some drole moments, capturing the era’s zeitgeist through Elizabeth constant sniping. She talks of shopping in “Marshall and Snelgrove” (a posh department store that later became Debenhams); she also mentions Nottingham lace and Sheffield steel, and the ugliness of the nearby mills, depicted in Lowry’s paintings. These were the days when British manufacturing and craftsmanship was appreciated, and still one of our valuable assets.

When Lowry receives encouragement from the outside world in the shape of a letter from an art dealer in London, praising his work; his mother damns the victory with faint praise and dire warnings. Of course, it all changes when snobbish neighbour, Doreen Stanhope (Morgan) shows an interest in Lowry’s painting of a sea-scape with boats. Elizabeth sees a mutual kinship in Doreen but this is not to be. And when her husband, a Labour-councillor f0rced t0 live in the area, has one of Lowry’s industrial landscapes exhibited at the Royal Academy’s Summer Exhibition in London, Elizabeth throws a tantrum, upsetting her son so much that he destroys nearly all his canvases.

Apart the irritating score and rosy-tinted flashbacks of happier times between Elizabeth and her young son, Noble manages to deliver a poignant, darkly humorous portrait of the Northern artist, enriched by really enjoyable performances from Spall and Redgrave, despite their closeted in the confines on their home for most of the film’s running time. Lowry briefly escapes onto the Moors allowing Josep Civit’s cinematography to break free of its domestic interiors. But the real question is why did Noble decide to limit the his film to this maudlin episode of Lowry’s life, when he would go on for another 40 years eventually moving to Derbyshire. Lowry claimed “I never had a woman” but he did have extensive female relationships, and his work flourished and took hold of the nation’s imagination, as he eventually became one of our best loved British artists. That’s the film we would like to see. MT