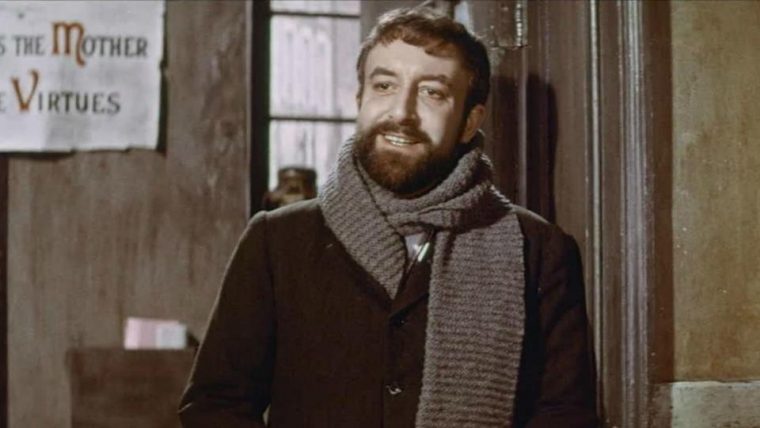 Peter Seller’s debut as a director is a rather lyrical bittersweet 1960s version of a Marcel Pagnol play adapted for the screen by Pierre Rouve with wit and insight. Playing the lead with a drôle debonair melancholy, Sellers is a well-meaning provincial teacher desperate to do the right thing and marry his love Ernestine (a foxy Whitelaw). He prides himself on his integrity but puts his foot down at giving higher marks to the grandson of a wealthy baroness (Martita Hunt). He is fired (by Leo McKern) as a result, and then led astray by Herbert Lom’s snide and corrupt government official, Castel Benac, who with his mistress and actress Suzy (Nadia Gray cutting a dash in a series of soigné rigouts) intend to set up a dodgy financial business using Topaze  (“He’s an idiot I like him”) as the malleable managing director. The moral of the tale is that money is power. And Topaze eventually discovers this.

At the time Sellers was going through a divorce and relied on the film to keep him said. But despite his time of trauma, the film’s success lies in its happy ending that confirms what many have discovered. It’s not the money that makes you happy but the freedom it offers: So when Topaze is asked “Has money bought you happiness? he answers “I’m  buying it now!”.

First entitled I Like Money (a song by Herbert Kretzmer gracefully performed by Nadia Gray swathed in furs) the film was chosen by the British public in an online vote in 2016 to be digitised by the BFI National Archive. It certainly proves its crowd-pleasing qualities with some enjoyable performances from Gray, McKern and Le Mesurier, although Sellars sadly reigns himself back too much leaving Lom to shine as the comedy standout. MT