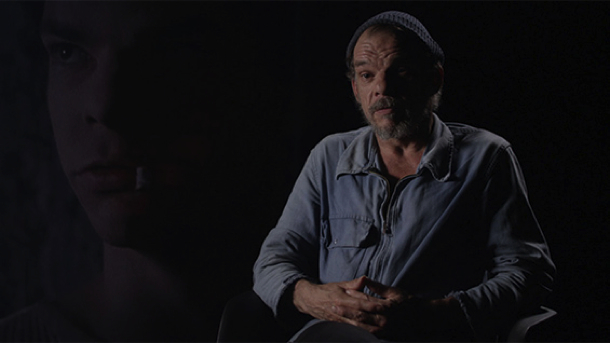 Tessa Louise-Salomé follows her HOLY MOTORS (2012) making-of with this career overview of France’s most mysterious auteur. After its world bow at Sundance in January, the film screened as part of the Director’s Cut programme at the 11th IndieLisboa last week.

On the one hand, a cult filmmaker like Leos Carax lends himself easily to a documentary like this. He has only five features to his name between 1984 and 2012, and while they return to timeless themes with an idiosyncratic, singular vision, each film seems to be more interested in how it relates to predecessors and successors rather than the world at large. Film critic Richard Brody refers to this in the film as “refracted self-portraiture.” Carax is a famously stubborn director who will endure years of financial trouble and production frailty in order to ensure the completed work matches his original idea. The tortured artist is the ultimate romanti

On the other hand, then, making a film about Carax brings palpable difficulties. What new insights might we get about the man, his life, his working methods—from he himself, his collaborators or other critical commentators? To what extent, furthermore, can discussions surrounding the artist go beyond the obvious clichés of hagiography, in order to situate him more critically and historically, within the industry or even French society as a whole? These are not questions particular to Leos Carax: they should be the founding queries from which any work of this kind embarks.

Unfortunately, in celebrating the mystery that surrounds Carax – perpetuated by himself as much as by others – the film reinforces a fairly non-critical approach. As such, the work is more suited to a featurette – perhaps one to be included on a high-end future DVD release, or in a ‘completed works’ box set – than as an original summary of, or even a probing introduction to, the director’s oeuvre. When someone says, “The recognition he received at such a young age will forever be held against him,” one wonders why this should be the case. Which social and intellectual currents is someone like Carax working within and against?

Though Carax is intermittently present in audio interviews, this is in many ways about the impact he’s had on those who’ve worked with him. Regular performer Denis Lavant – very much Carax’s discovery – features heavily, speaking of the duo’s difficult professional relationship and of the various demands Carax has made of him as a director. Other interviewees include Kylie Minogue (“he’ll kind of drift back, and say what he needs to say, and drift off again… he’s a bit like a breeze”), Neil Hannon of The Divine Comedy, Kiyoshi Kurosawa (who says MAUVAIS SANG is “a perfect film”), Harmony Korine (who says Carax’s films “have a deadly romance, a black romance, a dark romance”), as well as critics like Kent Jones and Jean-Michel Frodon; archive footage of Juliette Binoche is also included.

But where’s the zest, the revelation? MR LEOS CARAX plays out with all the stifled safeness of a fan symposium. When someone like Cannes President Gilles Jacob says, “Leos Carax is a visual poet,” what does it mean? Such statements, needless to say, are not very helpful. Only Brody – who earlier describes MAUVAIS SANG as “pure cinematic ecstasy” (eh?) – comes close to questioning the director, when voicing mild disappointment in POLA X (1999). Not that a film is inherently stronger if intellectual fisticuffs are on display, but Louise-Salomé’s documentary is in desperate need of a devil’s advocate—one of which Carax himself would surely approve. Michael Pattison