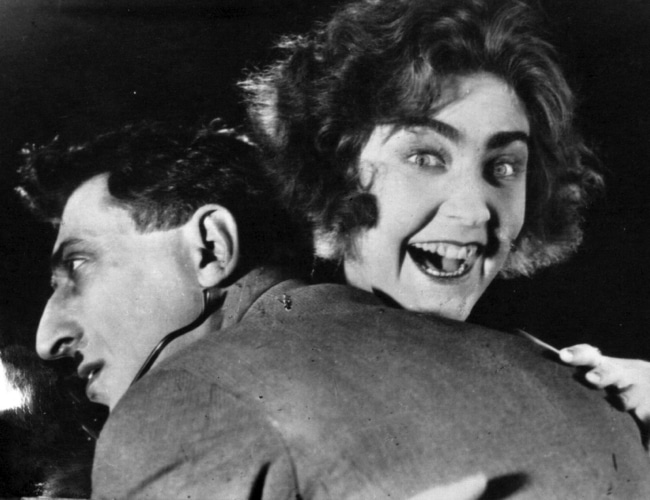 This triumph of early Georgian silent cinema mines its absurdist humour from petty bureaucracy when the country was still part of the USSR. The Georgians are a striking bunch whose regular features and dark good looks are particularly suited to silent film – this along with bold Soviet-style editing, expressionist set designs and avant-garde camera angles make My Grandmother an imaginative and amusing insight into a country that was under the Iron cosh but thriving with ideas and rich culture.

Behind the mad hysteria of the frantic satire important truths gradually emerge about the nonsense office workers have to put up with and there is a clear resonance with life today. The film was banned in the Society Union for almost fifty years – not surprisingly – because the overriding message here is “death to red tape” and that is born out, quite literally, in the bizarre finale that certainly mocks the State and does nothing to hide its light under a bushel in doing so.

Director Kote Mikaberidze (1896-1973) would go on to helm several other features in a career that also included acting and script-writing, but was best known for My Grandmother that made use of its special effects, imaginative set design, animation and twisted dark sense of humour that sees its main character, a “bureaucrat” (Aleksandre Takaishvili) fired for his incompetence and lazy attitude.

Narrative wise, the first act minutes is dedicated to satirising the Soviet system – where office life involves doing precisely nothing. Papers are pushed, documents stamped – it’s all about creating work and then not doing it, and the pen-pushers manage to avoid any responsibility for their shoddiness into the bargain.

When “the bureaucrat” goes home jobless to his wife (Bella Chernova) her  expressions of disdain are simply priceless. The only way he can avoid a complete loss of face is by finding himself a ‘benefactor’ (0r grandmother) who will write him a letter of recommendation. So off he goes to curry favour with a higher-ranking official who will reinstate him in a job – doing precisely nothing, again.

Although this sounds pretty tedious plot-wise the feature is far from boring. Quite the opposite. Visually it’s one of the most exciting silent films of the era with its clever concoction of fantasy meets reality. At one point, ‘the bureaucrat’ is pinioned to his desk by a giant flying pen which is meant to represent the local newspaper’s lampooning him. Meanwhile, in the background stop-motion animations feature a group of tiny toys and dolls who form a sort of ridiculous audience witnesses his fall from grace. While the support characters are performing their antics with extraordinary energy the office workers are mostly comatose, but objects around them also come to life.

Chernova is particularly brilliant as “the bureaucrat’s” wife, her expressive eyebrows are a legend in their own lunchtime. Imploring with him one moment and ignoring him the next, she is a bundle of belligerent histrionics from start to finish, while he practises trying to hang himself from the light fittings, in shame.

My Grandmother shows the Georgians to be wonderfully eccentric, and completely irreverent as far as politics is concerned, certainly in their early cinema, later political and social satire was more cleverly hidden in subtext. The film was eventually re-released in the 1970s but is rarely seen nowadays and would make an interesting companion piece to the ubiquitous Battleship Potemkin.  MT