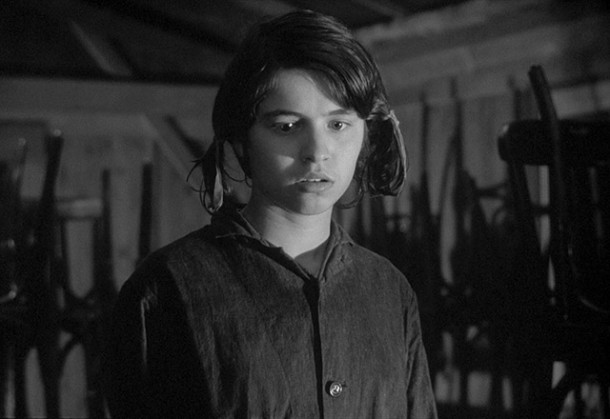 MOUCHETTE  is an intense tale of a fourteen year-old-girl living in poverty, in the French countryside. She is trapped by a dependent and uncaring family. The mother is dying. The father is an alcoholic. Mouchette’s baby brother is urgently in need of care. A local poacher almost abuses Mouchette, and the villagers criticise her innocent ‘sensuality.’ This is ‘catalogue of woes’ material. Many directors would go down an easy and obvious dramatic route, either making the teenager appear a passive victim in a clunky social critique, or else have her take melodramatic revenge on the family. Yet the searing and eloquent rigour of Robert Bresson’s direction takes neither of these options. MOUCHETTE is quite simply one of the most heart breaking films about human frailty that you will encounter. It is Bresson at the height of his creative powers and a classic of French cinema. But before the review – a plot spoiler: If you don’t want to know what it is, then avoid reading the remainder of this review.

MOUCHETTE is a tragedy that culminates in the girl’s suicide. In most commercial cinema the depiction of death can often seem ridiculously matter of fact, absurdly playful, excessively brutal or grotesquely over the top. As for suicide, well that’s an even harder act to authentically portray. Pawilikowski’s IDA (2014) has the aunt of the young Ida, kill herself by jumping out of the window of her second floor flat. The record of the Mozart symphony plays on. Life is taken from us. Or a cinematic life disappears from the screen. It was sensitively directed. We deeply cared. But there was no way anyone could have intervened to prevent it from happening.

Yet what do you make of a film where a child’s suicide is shown not just to be an inevitable release from a harsh set of circumstances, but actually strikes you with such physicality and spirituality that it becomes the most spontaneously lived out and defiant of acts?

Mouchette, carrying milk for her baby brother, approaches a hillock that runs down into a lake. She has been given a dress by an old woman. The girl wraps it, like a shroud, round her body and rolls down the grass. She stops, returns, rolls again and then once more. This time right into the water. On the soundtrack we hear brief snatches of the music of Monteverdi. The girl’s death has a ‘rightness’ about it. A response, or grace, that crushes the inhumanity she has experienced. Yet Bresson neither condemns nor condones. He depicts, with such tender neutrality, the operation of casual evil.

Beautifully photographed, incisively edited (so many shots of Mouchette angrily throwing handfuls of earth), brilliantly acted by a cast of mostly non-actors (Nadine Nortier’s ‘acting’ is amongst the greatest child performances in cinema) and guided by a purity of direction, that few filmmakers could even conceptualize. The new blu-ray edition of Mouchette is essential viewing. Alan Price.

MOUCHETTE IS SCREENING DURING THE AUTEUR FILM FESTIVAL TO CELEBRATE THE OPENING OF THE CURZON BLOOMSBURY | 1 APRIL 2015 at 13.30