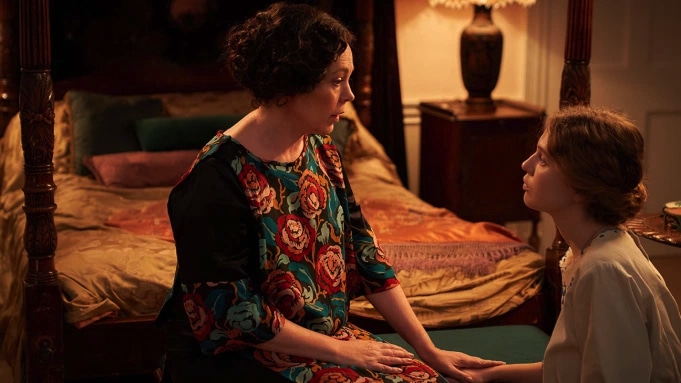 A nostalgic reflection on English family life ravaged by loss in the Great War is the subject of Eva Husson’s languorous female empowerment melodrama.

Slim of plot but indulgently languid in its evocative sensuality Mothering Sunday is seen through the eyes of a young girl in service reflecting back on a fateful summer day in 1924 when tragedy changed her life forever: and decided to become a writer. The timeline sashays backwards and forwards, Glenda Jackson adding grist as the older novelist Jane shrugging off the success of her prize-winning in the modern day.

Based on Graham Swift’s novella Mothering Sunday – a day when staff in service were given the day off to visit their mothers – evokes the sultry atmosphere of a doomed affair between a maid Jane Fairchild (Odessa Young) and Paul Sheringham (Josh O’Connor) the only surviving son of a well to do family in the verdant English countryside. Released from duties Jane spends the day in bed with her lover at his stately mansion in his parents’ absence. Paul is going to be marrying Emma in a fortnight’s time, so both he and Jane know their affair is over.

In the background Colin Firth and Olivia Colman play the Nivens, an older generation broken by loss and still mourning their sons killed in the war. But the focus here is on sensuality rather than storyline, and the camera lingers on their love scenes as Jane prances around naked. Meanwhile on the grassy lawns of Henley the Nivens keep calm and carry on over a tearful lunch with their coterie of bereaved friends, Colin fronting up well, Colman morose.

But there’s only so much loving-making and visuals of fusty libraries and flowers in a china vase a film can take. And rather than focus on Jane’s literary aspirations and how they eventually take shape and blossom professional – we see her occasionally penciling a word on a page, or in brief vignettes during a marriage in the 1940s, Husson is more concerned with the atmosphere, permeating this soulful story with a pent up feeling of loss and longing, that eventually erupts in the tragic denouement. In this sense the film is a missed opportunity to make better use of its strong cast of Colin Firth, Olivia Colman and Glenda Jackson. MT