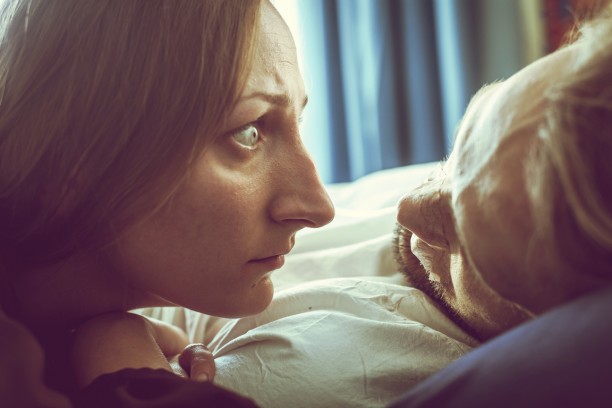 Estonia’s official Oscar foreign language hopeful is a sardonic suspense drama that explores themes of responsibility, personal freedom and community in a small town near Talinn.

Described by its prize-winning director Kadri Kousaar as Baltic Noir, it has the dark humour of Aki Kaurismaki and its heroine – a put-upon middle-aged mother (Elsa) forced to care for her comatose adult son – is Estonia’s answer to Kati Outinnen with her own brand of miserable charm. MOTHER also has Kousaar’s regular Finnish cinematographer Jean-Noel Mustonen whose visual style here has a striking resemblance to that of the Swedish breakout hit A Pigeon Sat on a Branch (2014) but the remainder of the crew is female (and blond).

Only a woman can understand Elsa’s life of quiet desperation trapped in a loveless marriage with her avoidant husband Arvo (Andres Tabun) and financially wrung out by her son Lauri (Siim Maaten) who was born when she was only 17, chaining her to domestic drudgery and destroying her dreams of studying in Moscow. Elsa channels her frustrations into obsessive cleaning routines in their cramped cottage, using gardening as a displacement activity for addressing her marital woes with Arvo. To make matters worse, Lauri is now bedridden after a mysterious shooting incident and Elsa is forced to care for his every need. The only glimmer of hope is her secret lover Aarne (Andres Noormets) – Lauri’s geeky colleague from school – who visits at inopportune moments bearing bunches of flowers and sexual favours which Elsa snatches hungrily rather than amorously while fending off a stream of unwelcome visits from Lauri;’s friends, confessors and hangers-on.

All this is treated with a tongue in cheek, toy-town briskness. The crime element of MOTHER is of secondary interest to its fascinating study of small-town social politics: Kousaar uses Lauri’s deaf mute status as a backcloth to expose the possible motives of his would be assassin: with each visit an intriguing story unspools encouraging the viewer to become amateur sleuth in a guessing game: was it his girlfriend, his childhood friend, his mate, or his doting pupil, and why?. It then emerges that Lauri took out a large sum of money shortly before the shooting, so clearly a financial incentive was the motivating factor in the crime. And it appears that several of Lauri’s guests are aware of the money stashed somewhere in the house and furtively look for it while Elsa’s back is turned.

Kousaar certainly takes on some heavyweight issues: her Cannes selected debut Magnus (2007) dealt with suicide: The Arbiter was concerned with abortion and genetics and now MOTHER sees dark comedy in tragedy and female desperation. Performances are strong with Malberg superb is her first lead role and Noormets and Tabun providing suitably insipid male support. But in the end, Kousaar makes fun of her tragic heroine after exposing her bitter hopelessness, and even her pathetic paramour ends up betraying her. Elsa is a sad character but her flaws are understandable and her motives justifiable in the circumstances. Arvo is a cypher whose only regret is that he never got to know his son, not to mention his wife. MOTHER is based on a play by Irish writer Kevin McCann and although Kousaar’s film is an inoffensive domestic drama is offers a rich underbelly of food for thought. MT