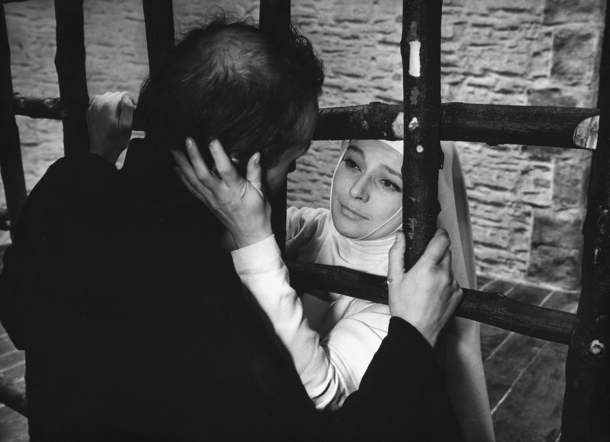 A forerunner to Ken Russell’s THE DEVILS (1971) inspired by Aldous Huxley’s fifties novel The Devils of Loudun, comes the minimalist splendour of Mother Joan of the Angels (Matka Joanna od aniolów) from Polish Film School KADR director and writer, Jerzy Kawalerowicz who rose to fame with his stylish noir thriller, Night Train (1959). A fave of Martin Scorsese, the film was lauded as a masterpiece during the brief Polish New Wave of the fifties, winning the 1961 Special Jury Prize at Cannes. In a remote and nameless village in 17th Century Poland, Father Josef Suryn (Mieczyslaw Voit) is despatched to investigate claims of ‘The Devil’ possessing a group of nuns. That is not all he finds.

Owing more to Dreyer than to Russell, there are also echoes here of Black Narcissus (1947) a certain salaciousness twists through this Polish black and white re-imagining of the supposed possession of an Ursuline Convent in the French town of Loudon in 1634. The convent setting in a bleak and barren landscape is almost metaphor for a repressed hardship of Poland under the cosh of Communism, adding a particularly piquancy to Kawalerowicz’s narrative: although being an atheist himself and had no sensibility for the Catholic Church. The opening sequences reflect the poverty of the times: an outbreak of the plague having just wreaked destruction on the village, the vast landscape is bare apart from the charred remains of a stake that scars the horizon, marking the spot of Urbain Grandier’s execution. The film has an ethereal quality with its stylised minimalist aesthetic, pristine visuals and exquisite rhythmic symmetry seen in the nuns, dressed in white robes, dancing out of the convent, photographed from above and also later as they leave in single file to a simple toll of the bell, and stand in formation to receive the Holy rites, captured by Jerzy Wojciek’s camera against a predominantly dark background contrasting with the black robes of the priests.

All is not well in this Holy place and after a brief meeting in the Convent with Father Suryn, Sister Joan slithers around the stone walls in feigned ecstasy, cackling mischievously, Clearly she has been possessed by dark forces. Lucyna Winnicka is superb as the lascivious and possessed Abbess Mother Joan. By contrast, Father Suryn (Mieczyslaw Voit) is solemn and rather open-faced in his peity as he conducts the ceremony to exhort her sin, recommending total isolation to treat her condition. Particularly captivating is the scene where ravens swirl around to the chanting of female voices followed by the chiaroscuro sequence of Suryn’s self-flagellation as he fights inner demons of temptation provoked by his reaction to Mother Joan.

By the end he has transformed into quite a different character and visits the Rabbi for advice and support. Here, white-faced against a black background, the dialogue between a magnificently vehement Rabbi (also played by Voit) and the tortured soul of Father Suryn, alternate in an inspired twist of genius, Voit’s face looming out of the darkness to play each character to perfection.

Father Suryn is made aware of the duality of religion and that Christianity originates from Judaism, and takes pity on Mother Joan, clearly appreciating her plight of possession and, in an ultimate sacrifice of pure love, receives the demons into his own being, with the axe murder of two innocent stable boys. It is an impressive performance by Voit and a lively re-working of the novel. Each scene is a masterpiece of framing and inventiveness underpinned by the complexity of a storyline that feels fresh and fascinating even now. MT.