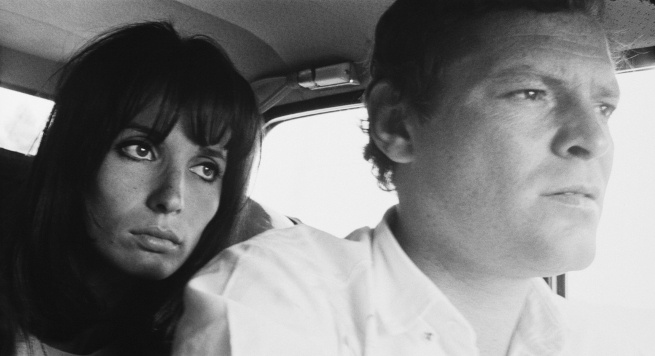 Winner of the Prix Max Ophuls for the best new director on its first appearance in 1968 but soon forgotten and never released in Britain, MORIRE GRATIS finally received its UK premiere as the concluding attraction in the ICA’s recent season devoted to Italian experimental cinema of the 60s and 70s. The only feature directed by Sandro Franchina, who died in Paris in 1998 at the age of 58, his film resembles Antonioni with jokes. The Italian art cinema having tired by the 1960s of neorealist examinations of the plight of the dispossessed, it instead turned its attention to the ennui of the affluent but discontented; represented in MORIRE GRATIS by Enzo (Franco Angeli), an arrogant young sculptor who stroppily consents to serve as a drug mule. His ‘cargo’ concealed within the belly of his latest work – a Capitoline Wolf with a tape recorder inside it – his drive from Rome to Paris proves eventful.

Clearly inspired by Dino Risi’s Il Sorpasso (1962), and also recalling John Schlesinger’s Darling (1965) in the graceless self-centredness of its principal characters; the bulk of MORIRE GRATIS concerns itself with Enzo’s time on the road with a leggy, kohl-eyed French sixties chick (Karen Blanguernon) who he picks up along the way. We never learn anything about her and neither engages our sympathy; and the predictably nihilistic ending demonstrates that the director shares our feelings about them. The film’s working title had been Il Sole all’Ombra (Sun in the Shadow), and although the general shiftlessness of its main characters and bleak take on humanity anticipates the countless interminable road movies that followed during the seventies and eighties, MORIRE GRATIS moves along as swiftly as the restless anti-hero’s sometimes careless driving (there’s even a car chase at one point), the scenery is attractive – including a pretty little churchyard where Enzo moves the headstones about for a prank – and clocks in at a brisk 83 minutes. The audience at the ICA enjoyed it. RICHARD CHATTEN

MORIRE GRATIS was presented in 35mm with subtitles especially created for the screening as part of the ICA & Tate Modern film season IF ARTE POVERA WAS POP: ARTISTS’ AND EXPERIMENTAL CINEMA IN ITALY 1960s-70s.