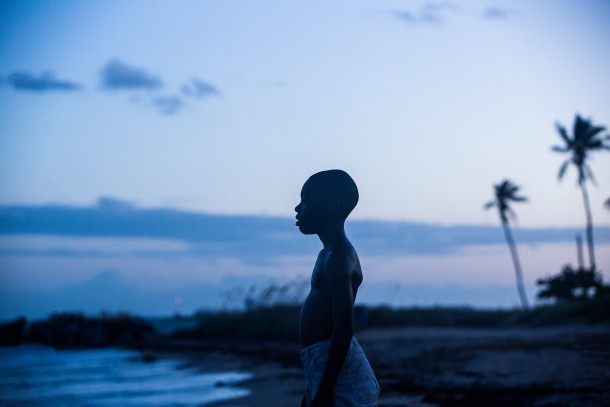 Barry Jenkins’ second feature MOONLIGHT is a mixed bag after the much-praised Medicine for Melancholy. High on atmosphere, but relying too much on atmosphere and restricted by a very episodic narrative, this gay interest drama is carried most of the time by great acting.

We first meet the main character, Chiron, in Miami, first as a small boy in Chapter One “Little”: Chiron (Hibbert) is running away from bullying kids, but his mother Paula (Harris) is not much help, since she is a good customer of the rather sensitive drug dealer Juan (Ali), who takes Chiron under his wing, helped by his partner Teresa (Monae). The dichotomy is that Juan is ruining Chiron’s home life, whilst fathering him at the same time. Chapter Two, “Chiron” sees the teenage boy, played by Ashton Sanders, questioning his sexuality, after an encounter with Kevin (Jerome). Torn between violence and passion, Chiron again ends up as victim. Chapter Three “Black” features the adult Chiron (Rhodes), who is a successful drug dealer, having pumped up his body meticulously in the gym. He meets a man from his past, and again, the quest for his own sexuality is the central answer to this episode.

Adapted from a play by Tarell McCraney by the director, MOONLIGHT leaves very much unsaid – behind the clichés – we suspect, there is a different Chiron hiding. The two main women in the film, his mother and Theresa, are not drawn out enough as real personalities and are mere cyphers, unlike Juan, who makes the most impressive impact on Chiron’s life. DoP James Laxton creates a wonderful mix between social and poetic realism. MOONLIGHT could have easily been set in South America; the glimmering light on the beach being central to the story. But some moments of magic do not compensate for the missing dramatic arc and dialogue which is often trite.

Certainly not a failure, MOONLIGHT nevertheless represents no progress for Jenkins; underlining the truism that any director’s second film is often the most difficult. AS