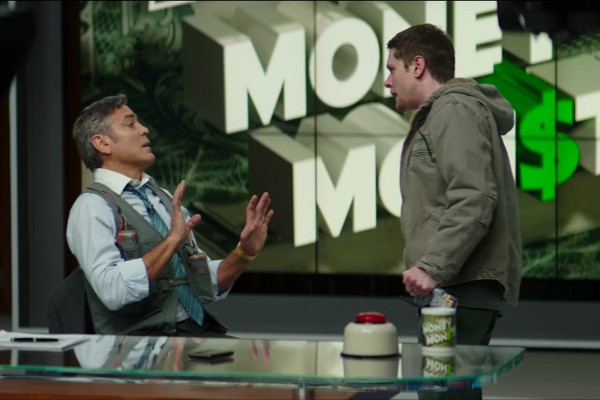 There is no point in being serious about Jodie Foster’s latest film Money Monster which plays at Cannes – out of competition. It comes under the genre of ‘silly thriller’ and for its 98 minutes running time provides a blast of vacuous energy that will sell some popcorn and a few laughs.

Julia Roberts plays a stressed out TV producer who has to manage her frolicsome financial presenter: Lee Gates, played by George Clooney, as he delivers a TV show called Money Monster intended as a dumbed down commentary on the stock market trends. Fired by cheap charisma and wearing the sort of hat you might see on St Patrick’s Day he delivers the financial news as if he has kissed the blarney stone.

But the news he brings on the day in question refers to a company Lee hot-tipped as being worth investing in. This financial derivatives trading company has just recorded losses of $800 million and taken down the savings of the kind of people who trusted Lee’s glib advice, including a truck driver called Kyle Budwell (Jack O’Connell) who appears on set holding Lee at gunpoint. Kyle wants as apology and forced Lee to wear a Semtex vest until he can get to the bottom of this Wall Street crisis.

Hardly the thriller to ruffle most peoples’ feathers this may delivers a few bolts of mild tension to the faint-hearted or infirm. In short, MONEY MONSTER delivers nothing new and does so in a crass way that feels as if it its slipped into the wrong decade where the far superior Broadcast News or even Margin Call were screening. Worse still, the film fails in its attempt to address or even challenge the financial system.

George Clooney brings solid star quality to Lee who ends up being a good guy and one of surprising integrity given his headwear and along with Julia Robert’s reliable turn as the authentic professional character. MONEY MONSTER is fun and throwaway and just the right film for a throwaway night out with popcorn. MT