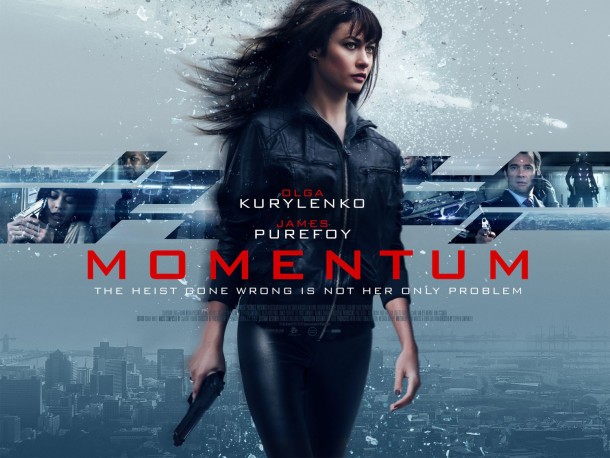 First time director Campanelli has honed his skill from being camera operator on big productions like Mazerunner and American Sniper: MOMENTUM is an out and out action bonanza where suspension of disbelief is a pre-requisite for watching. But he forgot the need for a good script.

Fleet-footed Olga Kurylenko, already versed in hand-to-hand fighting from Quantum of Solace and Hitman (she showed a more tender side in Terence Malick’s To the Wonder) is the heroine, surviving the whole 96 minutes – more than can be said about her countless opponents. After we learn that Freeman’s American Senator, a redneck, is behind all the machinations, we witness a bank robbery in Cape Town where the four robbers, clad in black leather outfits, identifiable by their blinking headlights (red, green, blue and violet), have difficulties opening the safe – the body of the bank manager is the key to the opening mechanism. The synopsis of this 20 million dollar caper, were all standard ingredients are perfectly executed, should be enough to identify and limit the target audience.

Whilst the standard elements of the genre (car/motorcycle, chases, technology and general mayhem) are perfectly executed, this is a play by numbers actioner whose absurb and untenable plot distances the viewer as much as its unlikeable heroine Alexis (Kurylenko): her arrogance is soul-destroying, and even her acting skills do not enhance her popular appeal. MOMENTUM is a cold, glitzy affair where technical bravado trumps soul and narrative twists to its detriment. AS