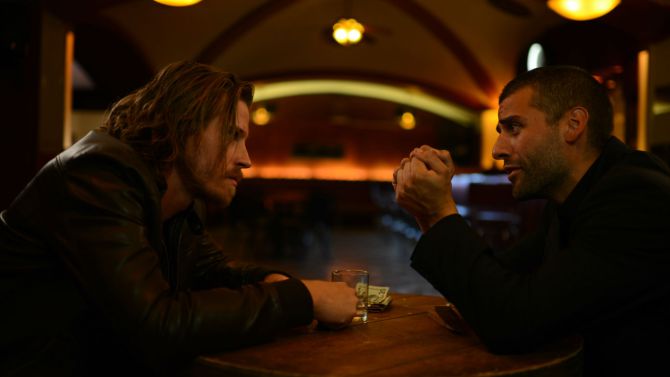 Disenchanted with his charmed life, a Hollywood hipster heads out to the desert where he meets a dangerous drifter with nothing to lose but everything to gain by following him back to his existence home home.

Director and Oscar-winning scripter William Monahan’s noirish thriller occasionally feels rather forced and artificial but his clever casting of Garrett Hedlund and Oscar Isaacs ensures an entertaining ride through contemporary California urging us to contemplate the meaning of fame, love and the ties that bind and asking the question: “When you get what you want, want do you want?”

MOJAVE‘s premise is actually very solid and even a noble one: the world of stardom is full of narcissistic types who can turn extremely dangerous if they don’t get the fame they think they deserve and this kind of twisted psychology runs rife in the concentrated toxicity of Hollywood’s starry Hills. Garrett Hedlund plays Tom, tells us in the opening scene how he’s “been famous since he was 19”. But in his early thirties, this facile success has left him empty and deluded: his English wife and daughter have abandoned him with his part-time lover (Louise Bourgoin) in a bijoux villa with infinity pool, and he is bored with the present and truculent about the future. Casting off to the Mojave desert in his jeep, in the hope of shaking off this ennui, he comes across a well-kemp wayfarer whom success has clearly deluded but whose articulate if embittered patter (“I’m into motiveless malignity”) indicates he’s no fool.

But things turn nasty as Tom immediately spots his alter ego, and after a brutal scuffle Tom takes Jack’s gun and finds refuge in a cave from whence he shoots and kills a federal officer mistaking him for Jack in the half-light of dawn. Tom then destroys the stolen gun and heads back to Los Angeles.  But Jack follows him back and after killing a gay guy who tries to pick him up, he uses his house for a base from which to stalk Tom, as he re-invents himself with a new look. Essentially a two-hander, support comes from Walton Goggins in an campy cameo as his agent and Mark Wahlberg as  his stroppy and petulant producer/partner.

Chocful of witticisms and literary allusions, Monahan’s script makes this desert duo slick and entertaining – but in a way that feels rather overplayed and pleased with itself. Clearly these two are easy on the eye and amusing to be around but Wahlberg’s turn just doesn’t work and is something he will regret in retrospect. These are people we don’t care tuppence for and so the denouement evokes little reaction other than reminding us that Hollywood and Los Angleles are places that echo loudly with an emotional and spiritual void.

Ultimately MOJAVE is a well-paced thriller: over-talky but always entertaining, Oscar Isaacs does his best at being a nasty psychopath but previous roles in A Most Dangerous Year and even The Two Faces of January have suited his talents better. Hedlund’s role is rather one-dimensional, but he plays that dimension very successfully and is mesmerising in each scene. MT