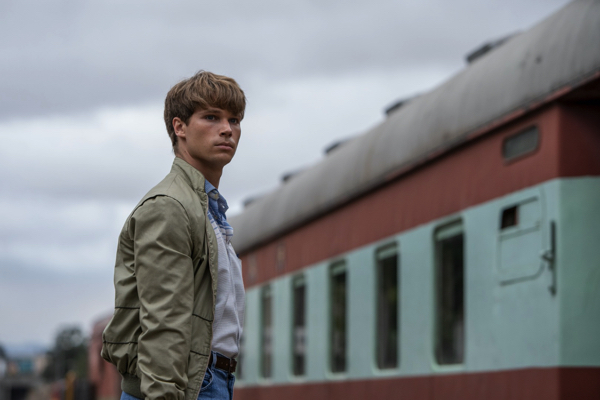 The last time South African director Oliver Hermanus was in Venice was for his Golden Lion hopeful Endless River. He returned last summer with MOFFIE, a magnetically intense drama that explores the sexual awakening of a young white male soldier conscripted into the army during early 1980s apartheid.

Based on the fictionalised memoir by André-Carl van der Merwe, this sumptuously cinematic film stands in contrast to the depiction of brutal army training in a ruthlessly homophobic Afrikaner platoon tasked with keeping the borders safe from neighbouring Angola, and the moffies – or gay cadets – at bay, homosexuality is considered a crime again God and the Christian nation.

Kai Luke Brummer is the driving force of the drama, convincingly showing how Nick develops from a shy ingenue to a confident and fully- fledged soldier. It traces his emotional arc making use of flashback to explore his incipient leanings towards gayness as a young boy in the local ‘whites only’ swimming club. Hermanus makes use of an evocative classical score lending a poignant undertone to this drama of stark contrasts. The film opens as 18-year-old Nicholas van der Swart is saying goodbye to his family before reporting his journey over inhospitable terrain to the army boot camp. His divorced father hands him a girlie magazine, as a private joke while his mother gives him a last cuddle in the chintzy home she shares with her new Afrikaner husband.

He soon makes a friend of the sympathetic recruit Sachs (Matthew Vey) who shares his views about the draconian training methods – bearing a glancing resemble to those in Full Metal Jacket – intended to prepare the men for a Communist enemy across he border but Nick is also drawn to a dark adonis in the shape of Stassen (Ryan de Villiers), who nuzzles up to him one stormy night during a training exercise when the two recruits are forced to share a sleeping bag. Nick is also forced to contend with the vicious and sweary Sergeant Brand (Hilton Pelser) who makes no bones about disciplining using violence on every occasion.

Hermanus leaves Nick’s sexuality fluid throughout although it is clear he has homosexual feelings for Stassen but needs to keep these under wraps for his own survival. Apartheid is illustrated on several scenes where the recruits verbally abuse a lone black man on a station platform but their own humanity is keenly brought to the surface demonstrating the ambivalent climate of their own masculinity and vulnerability. Music from Detroit artist Sugar Man provides a touchstone to the times – the USmusician was ‘discovered’ in Johannesburg and became the emblem of the young white South African music scene.

Dominated by a cast of talented non-pros obviously recruited for their striking physicality, Moffie makes for absorbing viewing. Jamie D. Ramsey’s lush camerawork captures the spectacular beauty of the Cape where Nick’s final encounter with Stassen in the ice cold waters of the Atlantic reminding us of the ambiguous nature of life and attraction. MT