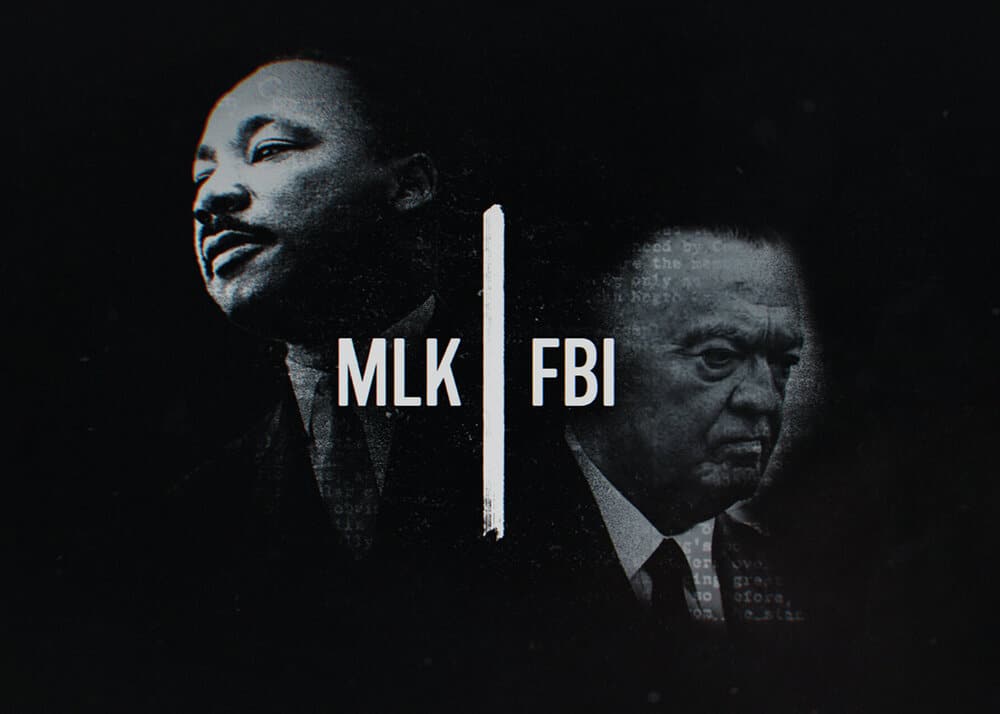 Seasoned documentarian Sam Pollard takes a deep dive into the FBI’s surveillance on Dr Martin Luther King (1929-68) in this searing study  proving that systemic racism is still alive and kicking in the USA today.

Enriched by newly released material, Pollard’s findings are inspired by David Garrow’s book ‘The FBI and Martin Luther King’ and cleverly put together by editor Laura Tomaselli and Benjamin Hedin.

There’s still more to this story because the actual wire tapes of the FBI surveillance of MLK won’t be be released until 2027 – but what emerges is a fervent obsession with the subject on the part of the FBI’s director Edgar J. Hoover (who headed the agency from 1924 until his death in 1972). It tells how the cross-dressing Hoover invested at least as much energy in the Civil Rights leader’s political activities as in his sexual conquests.

Hoover directed William Sullivan (for ten years the chief of the FBI’s Domestic Intelligence Operations) to wire tap King, not only at home, but during his hotel stays on the campaign trail throughout America. Hoover wanted to probe MLK’s extra-marital affairs to discredit his leadership and his campaign. He and his G-men used the white man’s prejudice with Black male sexuality, to denigrate ‘Black Men’ as animalistic beasts, endangering the sexual purity of white women and the racial integrity of the white race as a whole. This racist pathology, as shown in Griffith’ Birth of a Nation, is still alive today, with White Supremacists storming the Capitol on 6th of January. Back in the 1960s, all polls showed the popularity of Hoover’s agenda: the majority of the nation wanted him to defeat King and his movement.

Martin Luther King’s “I have a Dream” speech at the Lincoln Memorial in 1963, made him a household name, Hoover and MLK met only once, in November 1964, but sides reported the meeting as amicable, although many supporters on both sides, had a different opinion. Even though MLK was instrumental in the 1956 Montgomery (Alabama) Bus Strike, the FBI did not pay special attention to him back then. MLK only emerged as a one to watch, at least for the FBI, in 1963, when he led the March to Washington and the events of that same year in Birmingham (Alabama)  when Governor Wallace, a supporter of KKK, provoked an uproar.

It was unfortunate that one of MLK’s closest advisers, the NY lawyer Stanley Levison, who had faced HUAC trials and was supposed to help communist front organisations, gave Hoover the excuse to build King up into a “Black Messiah” figure, who wanted to destroy the USA with the help of the Communists. Footage of McCarthy-era Hollywood films Walk a Crooked Mile (1948) and I Was a Communist for the FBI (1951) show a real paranoia since the CPUS hardly played any real role in the political arena.

But Hoover and the FBI declared, that Black men and women were particularly suggestible to Communist propaganda. In 1963, President John F. Kennedy and his brother Robert, the Attorney General, authorised the FBI wiretapping King and his inner circle. This led to the discovery of King’s extra-marital affairs.

In 1964, President LB Johnson signed the Civil Rights Act, and MLK was awarded the Nobel Price for Peace, meanwhile Hoover sent ‘salacious’ material to King’s wife Coretta Scott King suggesting her husband consider suicide before Hoover made the material public – including a sort of ‘hit list’ of his sexual conquests.

The FBI’s actions did not stop with wire-tapping: they had two very influential sources in the MLK campaign who reported back daily on his moves. One was Ernest C. Withers, the “un-official” photographer of the Civil Rights movement, who worked for the FBI for 18 years. Then there was James D. Harrison, who gave the FBI all details of MLK’s personal and political assignations.

In 1965 protests against the Vietnam War become more numerous in the US and President Johnson is quoted as saying “we can’t be defenceless”, while accelerating the USA involvement in the war. King meanwhile was engaged in Southern Christian Leadership Conference ( SCLC), which led to the “Poor People’s Campaign” and the March to Washington in March 1968.

King was very much against the Vietnam War, but he was also aware of a need to support President Johnson. He broke his silence after 18 months of deliberations, stating “silence is traitorous”. At the same time, in March 1968, Sullivan began preparations for “Rape Allegations”, which were supposed to be made public.

On 4th of April 1968 MLK was assassinated on the balcony of the Lorraine Hotel in Memphis. The perpetrator James Earl Ray was convicted of his murder, even though many questioned how Ray could have acted alone, with the area swarming with FBI agents.

MLK/FBI leaves a bitter taste particularly in the light of the current political situation in the US after the storming of the Capitol. White Supremacis violence threatens the existence of a democratic USA. With the Republican Party hell-bent on destroying the very Constitution, their former President Trump was supposed to be guarding just please supremacist supporters happy, the nation has clearly reached a point when, 43 years after Martin Luther King’s murder, racism is threatening the country in an even more existential way. AS