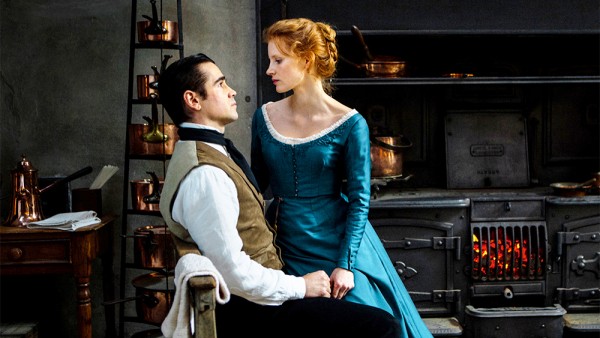 August Strindberg’s play was written in 1888 and premiered a year later. The playwright had seen the play as a tribute to Darwin. Set in a pure and naturalistic way, it showed the battle for survival between the Count’s daughter Julie and his father’s valet Jean, as seen and refereed by Christine, Jean’s fiancée and a servant in the house. Liv Ullmann has set the film in a manor house in County Fermanagh in 1890, where Jean becomes an English John and Christine, Kathleen. Ullmann attempts to soften some of Strindberg’s misogyny, which spoils many of his plays.

Set on Midsummer’s Eve, Ullmann’s Julie (Jessica Chastain) is a brittle young woman, in awe of her father, but trying to follow the advice of her mother – who died when Julie was a child – in never becoming the slave of a man. She is a virgin, and no match for the scheming John (Farrell), who has lusted after her since boyhood and wants to run away with her, using her father’s money to realise his grand dream of opening a hotel near Lake Como, where he was once a headwaiter. After sleeping with Julie, and rebuffing his fiancée Christine (Morton), it dawns on John that Julie will never be able to get out of the shadow of her privileged upbringing: he tells the desperate woman to kill herself, so as to save his own discretion coming to light.

Miss Julie is more or less filmed theatre and apart from the several outdoor scenes where Julie frolics in a woodland idyll, the action takes place in the manor house, which is more like a claustrophobic prison than anything else. Shot through with this sombre and stultifying aesthetic, even the seemingly whitewashed walls feel deadly grey –  Ullmann’s version has very much in common with another Strindberg play, Dance of Death (Two Parts), written in 1900. Julie and John fight it out between themselves but there is never any doubt who will be the winner.

In spite of the great pathos, the two lead performances save the film. Chastain’s Julie is the disturbed child woman who looks for a way out of her ‘Golden Cage’, given to histrionics one moment then crawling at John’s feet as if she was his servant, the next. Her emotions are all borderline neurotic, she has not really developed into an adult. The oily John is a masterful portrait of a creep by Farrell, slimy as an eel, he controls and manipulates Julie to save his own skin, mastering perfect spoken French for the role of a faux sophisticate who can barely hide an empty, jealous and small-minded past. It would have been easy for Morton’s Christine to be marginalised, but her performance as an honest, faithful and rather brave woman is astonishing. She is not afraid to tell both Julie and John the truth about their personalities and unmask their lack of authenticity, and provides a mirror into which the feuding couple are afraid to look. Running at over two hours, the drama is by far too long for the limited interaction, MISS JULIE is not helped by an old-fashioned and stagey treatment, leaving it firmly in the past, in spite of its contemporary appeal. AS

OUT ON GENERAL RELEASE AT SELECTED VENUES ON 4 SEPTEMBER 2015