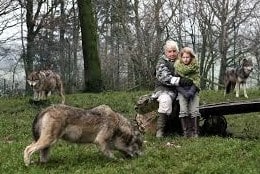 Sam Hobkinson (Fear City) tells one of the most bizarre stories of modern times. Misha and the Wolves could be a fairy tale, but it turns into a nightmare – and then into something completely beyond the wildest imagination.

In the remote town of Millis, Massachusetts. Belgian immigrant Misha Defonseca regaled friends and neighbours with her experiences during the Holocaust. She told the members of Temple Bel Torah how, as a little girl in during wartime 1941, she left her loveless foster home and began to search for her biological  parents who had been deported to a death camp. Taking up with a pack of wolves she walked on foot from Belgium to Germany, it what would be an eventful and violent journey.

One of her neighbours of Defonseca Jane Daniel, ran a small publishing company, the Mt. Ivy Press and offered to publish the memoir as ‘Misha: A memoire of the Holocaust Years’. It came out in 1997 and was a great success, as was the French version. In 2007, the French filmmaker Vera Belmont shot the story as Survivre avec les Loups. But the cracks started to show: Defonseca took Daniel to court, over her refusal to be interviewed by Oprah Winfrey. Next came a major discovery: Defonseca had used two different versions of her birth name: one for the America edition, one for the French one. Than everything unravelled quickly, thanks to forensic genealogist Sharon Sergeant, and Evelyne Haendel, a Belgian researcher and Holocaust survivor. What emerged was a completely different version of events.  Misha was born in 1937 as Monique de Wael to catholic parents in Etterbeek, Belgium. She never left home as a child.

Hobkinson then uses the Errol Morris technique, turning the narrative into a Patricia Highsmith style story where the focus is no longer Defonseca – but a gullible public on both sides of the Atlantic intrigued to have discered just another plucky Jewish survivor. The guilt surrounding lack of social responsibility during the Shoah still haunts communities who react with denial (as in Poland) or half-truths as they do in France. Misha’s real story is also chained to this process of uncovering the kindness of strangers who courageously risked their own safety to help Jews. Opportunism is still rife in the publishing world, Jane Daniel being only one example. DoP Will Pugh documents this torrid tale of a deception that provides a welcome version of the truth, an antidote to bestseller spin. Misha Forenseca still lives in Millis. AS