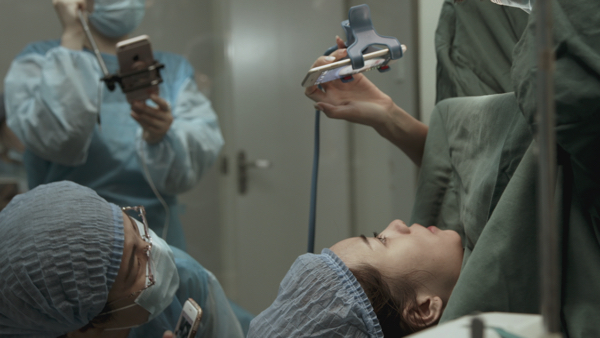 The cult of beauty and celebrity coalesce in this deeply unsettling documentary that looks at Beijing-based plastic surgeon Dr Han and his permanent quest for perfection, not only for himself but for his clients. The film once again connects to the narrative of live-streaming, a big business in China, as we saw in Present, Perfect (2019) the Tiger Award winner at Rotterdam last year.

In her sophomore feature, German filmmaker Sascha Schoberl makes no judgement on Han’s own self-focus. This is not a case of a little nip and tuck here and there, done discretely for women of a certainly age. Dr Han’s patients are young slim, and business orientated, and their surgery is plain for all to see.

Live fashion photos of the Dr Han in various natty outfits decorate the walls of his practice. In the firmament of China’s burgeoning plastic surgery industry, he is a star. Nor does the director question his unusual professional approach, allowing a roomful of spectators to attend the and record the live surgery on their mobile phones. The patient, a young Chinese model who undergoes the procedure without general anaesthetic, has given permission because this is all part of the process of monetising live-streaming, And it cuts both ways. The participants all garner something from the process, although why the camera looks at the patient’s face rather than the operation itself, is unclear. Clearly her stoicism – and tacit endurance – adds to the compelling nature of the footage.

But beyond achieving beauty, girls in China are really looking to make money from the process of improvement surgery. And this is made possible and achievable thanks to Chinese massive social media platforms WeChat and Weibo who attract millions of followers to experience the surgery – live-streamed from the operating theatre to art fairs via fashion shows, and the private homes of this vast nation – they will use their mobiles not only as a form of contact and entertainment, but also to finance their lives.

Drone footage hovers over Beijing’s vast tower blocks in the opening scenes as the camera descends on Dr Han’s substantial headquarters in the centre of the Chinese capital. Dr Han goes through his spiel encouraging and mentoring as the women congregate to attend the breast enlargement operation for a young flat-chested model whose sole aim, apart from achieving her desired breast size, is to create a platform where she can showcase her assets and make money from garnering followers on social media. The only slight criticism here is a lack of backstory: who are these girls, what are their personal stories, and how about some more clarity on Dr Han?

The procedure completed, the good doctor is not relieved that things have gone well, and that the patient has emerged fit and fulsome; he is clearly dismayed not to have attracted more followers, just click bait. Meanwhile, the enhanced model is pouting happily in her white bed holding a bunch of flowers for her followers delights, having been forced to look chipper throughout the procedure, her face having being filmed continuously by another woman encouraging her to smile, despite her nervousness.

Being a woman is highly competitive business all over the World, as increasingly so. Intelligence and personality are clearly not enough, and surgeons like Dr Han have cottoned on these women’s susceptibility and panders to their vanity and insecurity. A compelling film that questions beauty as a simultaneously essential yet vain element of society in the era of selfies. MT