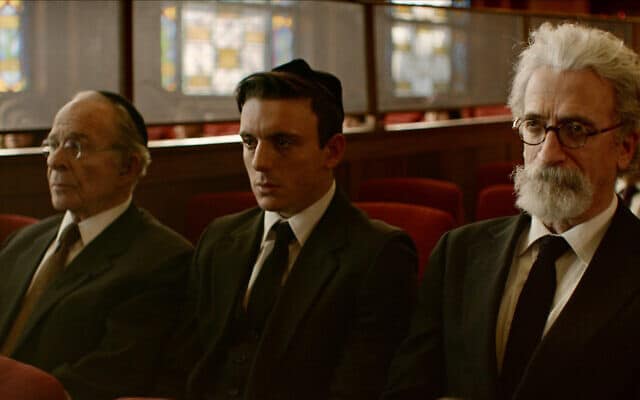 Eric Steel’s documentary The Bridge was a shockingly realistic study of suicide attempts from the Golden Gate Bridge. Here he turns his camera on a more sentimental subject, a gay coming of age drama set during the winters of 1986 and 1987 the rapidly changing milieu of Brighton Beach, NYC. Based on David Bezmozgis’ tale about Holocaust survivors from Europe, the title refers to a Jewish prayer meeting, requiring the quorum of ten men to go ahead.

David (Levine) is a seventeen-year-old yeshiva student at an ultra-orthodox institution, and wants nothing more than to leave his parents, an abusive father and over-protective mother (Blum) to start a new life at a state school. Close to his grandfather Josef (Rifkin), whose wife has died.

Josef wants to leave the flat he shared with his wife understandably because there are too many memories there. He and David try to get an apartment in a block of flats subsidised by a Jewish charity. David gets on much better with his grandfather’s generation, is drawn to Itzik (Margolis) and his partner Herschel (McCann), who share a flat, their relationship sanctioned by the other tenants.

With David discovering his sexual orientation, despite attention from the attractive Alicia (Meyer), he feels more and more out-of-synch with his family background. His first lover, super macho Bruno (Hurt), is a revelation for David, but also introduces him to the raging death count in the gay community as the AIDS epidemic claims many victims. More and more liberated, David joins a school in Greenwich village and is properly introduced to the writing of James Baldwin (who died in December 1987) having found out that Bruno used Baldwins’s “Giovanni’s Room” simply as a calling card for pick-ups. After Itzik’s death, his son selling all his furniture, Herschel is left homeless with David drawn into the complex undertaking to find flats for the two homeless old men.

There are too many flaws in what could have been a stunning feature: to start with the running time of two hours is indulgent, since there is no proper story, just a series of episodes. Steel wanted DoP Ole Bratt Birkeland to use images which could have been at home in any up-market Hollywood feature. Dull brown and grey colours give the proceedings an artificial background. And Steel, like many before him, does not do justice to the survivors of the Holocaust, whose lives are blighted by traumata and survivors’ guilt. Like many features set in the death camps, the post-life of the survivors cannot be caught in any way realistically – there is always too much of a chasm between reality and film set staging.