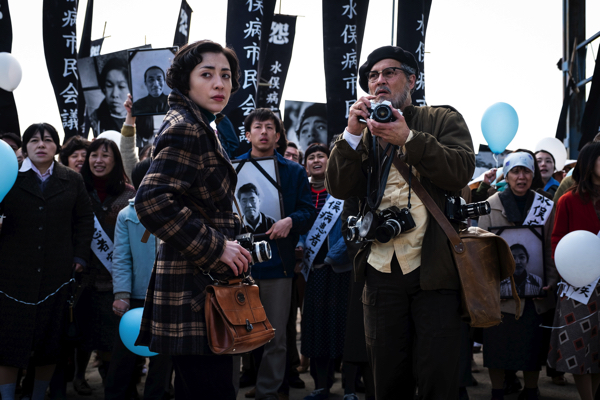 Andrew Levitas pays tribute to the victims of mercury poisoning in this slickly cinematic if rather glib affair that focuses on those affected by a leak of the lethal substance in the Japanese seaside town of Minamata but also raises the profile of industrial accidents all over the world and those who have suffered in their wake.

No fewer than four writers were involved in a script which starts off rather well but spins out of control in the final stages of this gruelling and over-wrought melodrama. An odd coupling of Bill Nighy and Johnny Depp actually works to the film’s advantage Depp wringing out his often soppy dialogue with a drole flourish as he plays veteran alcoholic war photographer W Eugene Smith down on his luck and looking for a story to reanimate his flagging career and finance his future (and brood of kids), and finding it in this tragic Japanese cause. His photograph of a woman and her maimed child “Tomoko in her bath” is one of the most searing ever committed to celluloid, and received widespread attention in 1972 although it did not make Life’s cover feature – that was dedicated to Raquel Welch in a clingy jumper – it did get 8 pages and created a sensation at the UN Environmental conference that year, according to the New York Times.

DoP Benoit Delhomme has fun with his lenses on the widescreen and in intimate closeup making the most of the dramatic scenario as we whirl through sumptuous settings of New York and the Japanese countryside. Depp is rather good as the pathetic snapper who feels sorry for himself and his failing career. The dark lustrous locks of his pin-up days are replaced by a shock of grizzled grey hair but he still exudes charm in spades, his dark eyes expressing the pathos of his fall from grace. Then along comes the sultry Aileen (Minami) who introduces him to the Minamata project and after failing to persuade struggling Life editor Robert Hayes (Nighy in sardonic mode) to pay for his trip to photograph the disaster-struck town, he eventually makes the journey himself and after a few false starts and a fortuitous bonding with the Japanese temptress he eventually hits his groove and is considerably moved by those affected, and driven to more navel-gazing and drinking, hence a product placement for Suntory whisky. But when all is said and done, it’s thanks to ‘Gene Smith that the region eventually gets the support it deserves, although the lofty melodrama that tells its story often drains our reserves of sympathy and we suffer compassion fatigue by the closing stages, or maybe I’m just a cynical journo. MT