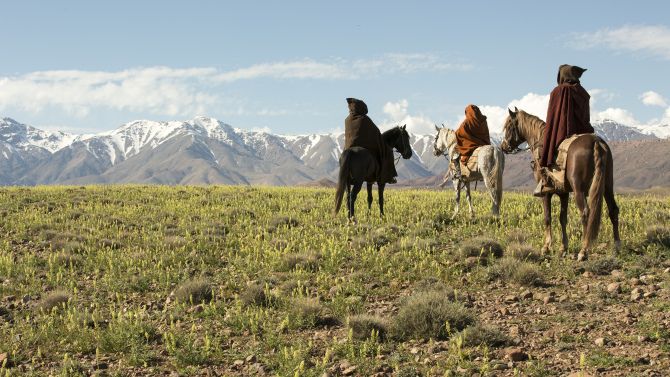 Best described as a meditation on the strength of religious faith, this proves to be a gruelling journey – both physically and metaphorically – but it is resonant and ravishing to watch in its and spartan simplicity, and set to an atmospheric occasional score it has the striking otherworldly quality of Aguirre, Wrath of God (1972) and Last Days in the Desert (2015).

The travellers Saïd (Saïd Aagli) and Ahmed (Ahmed Hammoud) are eventually aiming for the ancient city of Sijilmasa, which is the ancestral home of the sheikh and where he intends to be buried. But death does not wait and reaches him during his final journey on a bleak mountainside. The caravaneers, fearful of the mountain, refuse to continue transporting the corpse.

In a parallel narrative, set in the modern world, a couple of taxi drivers who are modern incarnations of Ahmed and Shakib, fight for the job of taking the sheikh to his final resting place in their rickety vehicles. Shakib is chosen. Once again, his assignment is clear: he has to help the accidental caravaneers to reach their destination.

As the caravan travels, so the mostly reluctant tribesmen diminish in number, as one is drowned in fast-flowing river, as the troup come under fire from bandits, French Spanish director Brings his experience of living in Morocco to bear in a thoughtful drama that sometimes feels elliptical and difficult to connect with for the uninitiated. But there is plenty to enjoy in Laxe’s magnificent visuals and the film connects loosely with Ben Rivers’ 2015 film The Sky Trembles and The Earth Is Afraid and the Two Eyes Are Not Brothers (2015), which featured Part of the shooting of MIMOSAS.

The cast of newcomers provide convincing performances and only occasionally angry outbursts disturb the tranquility of this placid and relaxing drama enhanced by Mauro Herce’s resplendent cinematography. MT