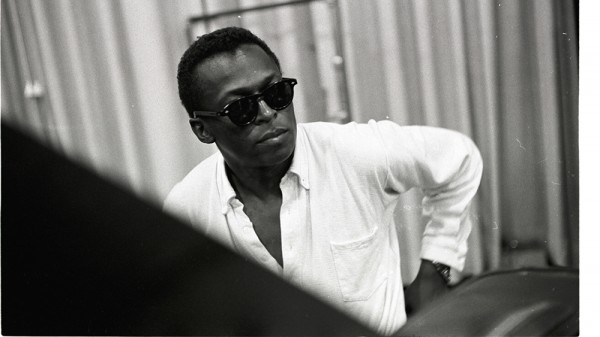 “All I ever wanted to do was communicate through music”. The iconic jazz trumpeter and composer developed smooth romantic vibes and invented a cool, sophisticated masculinity that came to be known as the ‘Miles Davis Mystique’. For over five decades Miles developed various jazz styles from bebop, cool jazz and jazz fusion working with Prestige, Columbia, and Warner Brothers despite a rocky personal life that was full of love but fraught by ill health and emotional instability.

The film delves into the archives opening with seductive slew of stills that capture Miles’ style through the ages. This all plays out in velvet black and white to the iconic melody Kind of Blue while Davis’ deep husky voice making sporadic contributions to the drive the story forward.

Miles Davis (1926-1991) grew up in a well to do family in Illinois where his father was a dentist. His mother was keen for him to get a classical music education and so in 1944 he started at the New York’s Juilliard School during the day and headed to the famous 52nd Street in the evenings where the music scene hung out in its many with Jazz clubs. And it was here that he discovered B-Bop and gradually taught himself to develop his own iconic style. It was not an easy time personally because his girlfriend Irene soon turned up with their child so his spare time was spoken for with the domestic demands. But music was his first love and the end of the 1940s saw him working with one of his major collaborators Gil Evans.

Drifting over tp Paris in 1949 he met and fell in love with Juliette Greco. Suddenly the world was opening up and he found himself treated as an equal by some of the intellectual giants of the day: “I was living in an illusion of possibility”. Amongst these luminaries was was Jean Paul Sartre who saw asked him why he wasn’t already married to Greco. Davis simply answered: “Because I love her.” The love lasted nearly all his life but it couldn’t work in the confines of the US where racism was still rife.

Returning to New York he was”back to the bullshit white people put a black person through in this country”. He describes how he hit rock bottom again and lost his sense of discipline, turning eventually to heroine and losing direction in his career. Eventually his father took him back to his own birth place of East St Louis hoping to bring him back to normal in the family farm. And according to childhood friend, Lee Annie Bonner, he eventually got himself clean.

By the mid 1955s, age 29, his career was looking positive again and he found himself playing in the Newport Jazz Festival where Columbia Records selected its artists – and he would become one of them. Suddenly Bebop found a mainstream appeal for white people – Miles Davis made his name during the festival playing vulnerable ballads and hit a romantic vibe that resonated with audiences everywhere. He developed a unique voice: one with a sense of romance that avoided sentimentality born out of richly sophisticated vibes that touched on waves of emotion as they built their pure and elegant melodies.

But tragedy struck again when he discovered a growth on his larynx and had to stay silence for several months. Bizarrely this is how he developed the gravelly voice that still defines him today. He met and fell for dancer Frances Taylor who was much sought as an artist and pursued by all the stars of the day for her beauty and particularly he long legs. Miles saw her appearing in Sammy Davis Junior’s Mr Wonderful on Broadway and the two found stability and love during a time when he was producing some of his most ground-breaking work: “Now I’ve found you I’ll never let you go” was according to Frances his opening gambit.

One of his most incandescent musical journeys is the one that tracks Jean Moreau through the streets of Paris in Louis Malle’s 1958 French New Wave drama Ascenceur pour l’échafaud (Lift to the Scaffold). The pianist René Urtreger – who played piano for the piece talks at length about one of the film’s best known jazz scores.

Nelson highlights how Davis’ music gained popularity not just with jazz lovers but the mainstream crowd. His 1959 album Kind of Blue appealed to just about anyone interested in music. The album also introduced saxophonist John Coltrane. His style developed in his next album Bitches Brew which he describes as “cosmic jungle music.”

But when Frances was signed for Westside Story, Davis was back on the cocaine trail and deeply jealous of her admirers in the musical’s cast. He told Frances to quit the show and the two of them set up home with his own kids. But Frances sparked a jealousy in Davis he could not overcome and she realised the marriage was doomed. He deeply regretted her leaving and later commented: “Whoever gets her is a lucky son of a bitch”.

Dark years passed but once again Miles re-invented himself during the late 1970s experiencing funk and a more loose way of playing. This segment covers his meeting with actress Cicely Tyson, a bond which continued to enrich his inventiveness until the early 1990s when once again, his career hits the buffers.

Nelson tells it all in the usual talking heads style – Frances Taylor, Greg Tate, Carlos Santana, Herbie Hancock and his final manager Mark Rothbaum all appear and a straightforward narrative structure enlivened by many photos and clips from the archives. The film luxuriates in its musical interludes which are enjoyable and plentiful making this possibly the definitive biopic of one of the most inventive jazz musicians of the 20th century. MT