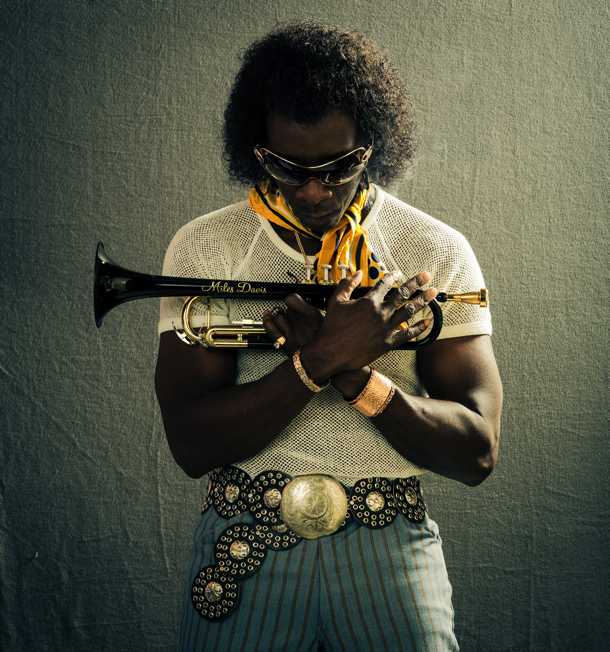 Cheadle plays it close up and intimate, capturing the mercurial nature of the trumpeter but sadly
his music hardly features at all, instead his co star Ewan McGregor shares most the screen time as a music hack, Dave Braden – purportedly from Rolling Stone magazine – who has been sent to report on the musician’s putative comeback: “If you’re gonna tell a story, man, come with some attitude,” Davis advises him in an early show of feisty bravado. “Don’t be all corny with this shit.”

In the event, Cheadle’s narrative is so freewheeling that it mostly feels unsatisfying in a doc that gives the audience scattergun snatches of music but no full numbers. MILES AHEAD is largely composed of outbursts, memories, flashbacks, and smoke-fuelled musings on Davis’ life. Devotees of jazz or and the celebrated auteur will be disappointed if they are expecting a musical biopic, and if you are hoping for an introduction to his music – look elsewhere.

Co-scripted by Steven Baigelman, who also worked on the James Brown 2014 biopic, Get On Up. Cheadle does succeed in evoking the free-spirited and reclusive nature of a man who preferred to call his music ‘social’ rather than ‘jazz’.  The soulfully-eyed Cheadle also has the wiry frame and sinuous elegance that fits the part.

During the second half of the Seventies, Miles Davis took a break from the limelight due to chronic pain from a hip injury and this is where Cheadle opens his narrative. Apparently there is a hidden session tape that has fallen into the hands of a music producer Harper Hamilton (Michael Stuhlbarg) and the storyline follows Davis’ attempts to recover it. Braden befriends him through the medium of some top drawer cocaine  (supplied by a wealthy student fan (Austin Lyon), and this section explores the greed and opportunistic nature of the record business with the finger particularly pointed at Columbia Records. In flashback the film also revisits Davis’ worldwind love affair and marriage (in the late sixties) to celebrated dancer Frances Taylor – a knockout performance from Emayatzy Corinealdi – and these emotional interludes give the film its best moments cinematically and some much need dramatic heft, as the couple fall madly in love. Cheadle also portrays the unravelling of their relationship (due to his infidelity, drugs and violence) with a piercing poignance.

Music-wise there are excerpts from Sketches of Spain and Kind of Blue played during smoky recording sessions where Davis sports some dapper designs in a vibrant retro palette betokening the respective era. There is a vignette involving a young jazz trumpeter Junior (Lakeith Lee Stanfield), a brilliant young jazz trumpeter whom Harper is cultivating – this may actually be a clever technique for introducing Davis himself as a young man.

All it all, this impressionistic jumble of snatches from Miles Davis’ reclusive period and earlier life captures a maverick man whose musical talent was evident and enduring despite his debilitating illness and drug abuse. Clearly too, Miles Davis’ musical career deserves more extensive treatment but that’s another film. MT