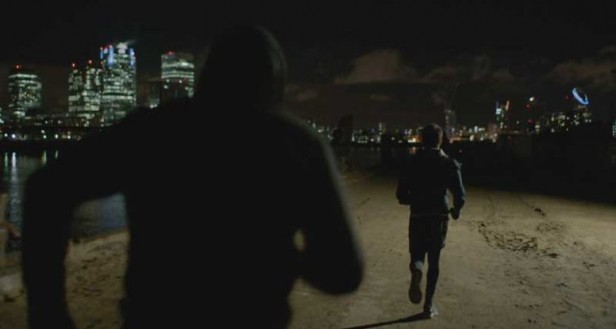 MILE END is another British film that loves to hates the Bankers (who offer them funding them through the EIS scheme); with a selection of nauseously unattractive characters who appear aimless and forlorn in their lives, bickering and purporting to help each other amid the twinking skyscrapers of gloomy old Docklands – yet slowly through all this dispondency a tense thriller starts to make its way to the surface in Grahame Higgins’ fourth feature that won him an award in the New York Independent film festival this year.

When Paul (Alex Humes) is made redundant at his publishing job, he believes running may be the answer to help him mull through his life and find a way forward with his girlfriend Kate (Heidi Agerholm Balle). He comes across American John (Mark Arnold) out jogging one day, the slightly older grey fox is suave and assured and comes across as a mentor. As they slowly get to know one another, John appears resentful of the other City types they pass on their daily jog through the wharves and waterways, and while John offers advice and business ideas, his comments on Paul’s personal relationships feel ominously judgemental and distinctly anti-capitalist for a soi-disant City guru. Then Paul’s friend (Valmike Rampersad) mysteriously gets killed while out jogging and Paul begins to question John’s ulterior motives.

Creaky performances (particularly from an irritatingly insipid Alex Humes) and some ropey dialogue don’t do Higgins’ drama any favours, but Anna Valdez-Hank’s pristine camerawork, Ed Scolding’s subtle atmospheric score and the enigmatic character called John (well-played by Mark Arnold) keep things ticking over tensely during the film’s 101 minute running time. MILE END is a thought-provoking thriller whose style and atmosphere overcome form and substance in s fragmentary narrative leading to an open-ended conclusion. Many may find MILE END unsatisfying, but if running is your thing, this is worth a watch.  MT