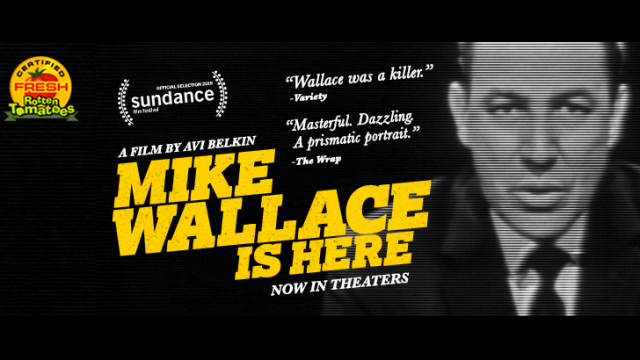 Director Alvi Belin (Winding) has avoided hagiography in his biographical documentary of  CBS-TV journalist Mike Wallace (1918-2012). Equally a political history lesson as well as a course about changing Television habits in the USA, Alvi Bekin throws light on the professional and personal career of Wallace, who was only overshadowed by Walter Conkrite and Edward Murrow in his metier.

Wallace began his career in 1939 at CBS Radio with game shows like Curtain Time, which featured heavy advertisement by the show’s sponsors. After his return from war duty, he switched to the new medium of TV, where he made a name for himself in Night Beat (1955-57). It was followed by the Mike Wallace Interviews, which lasted the following two years. In 1959 he had his first great scoop, interviewing Malcom X of Nation of Islam – the latter being very much aware how much his life was in danger. In the early 1960ies, Wallace made a living mainly from advertising – ironically some ads featured Parliament Cigarettes. After the death of his eldest son Peter in Greece, Wallace decided to stay clear of ads, and become a serious journalist. After a stint on the CBS Morning News (1963-66), he created and stared in 60 Minutes, the show that made him a household name in the USA; which he only left after 37 years, aged eighty-four in 2006.

This new documentary opens fittingly with Wallace engaging with (the then) Fox News host Bill O’Reilly, and haranguing him over his interview style. O’Reilly claims it’s like the pot calling the kettle black. “If you don’t like me, you’re responsible”.

The truth is somewhere in the middle: Wallace was keen to point out Larry King’s failure as a husband (seven divorces), but was very defensive when interviewed about his own marital woes.

The line-up for Wallace interview partners is long and features such heavyweights as Eleanor Roosevelt, Salvatore Dali, Vladimir Putin, Martin Luther King, John F. Kennedy, Rod Serling, The Great Wizard of the KKK movement and a soldier named Paul Meadlo, who was a participant in the My Lai massacre during the Vietnam War. The Ayatollah Khomeini is caught in an interview asking for the removal of President Sadat of Egypt: “He has betrayed Islam. Sadat is a traitor to Islam and I want the people of Egypt to overthrow the traitor, because that is what you do with a traitor”. Some month later Sadat was assassinated by his own soldiers, marching at a parade in front of him. Then there is a young (and handsome) Donald Trump, telling Wallace “if nobody fixes the USA, there will be nothing of the USA left, or the world”. But he strongly denied any interest in entering politics.

In 1995, a 60 Minutes episode was cancelled, after the producers clashed with Dr. Wigand, when he defended the tobacco industry over claims about smoking causing cancer – with Wallace perhaps in denial about his earlier ads for smoking. And then there is Vladimir Putin, wishing “Americans all the best”, after having denied that journalists in Russia are under threat. He also stated, that “the opposition to his government is a force”. It ends in a very poetic way, with Wallace and Arthur Miller walking in nature, the playwright answering Wallace’s question about posterity: “How will people remember me? As a decent guy, that would be fine. Work is natural like breathing. Work for that little moment of truth”.

The whole documentary is based on TV and newsreel clips, with Wallace being the central focus, but not in an overwhelming way. Bekin shows respect, but does not overdo it. It is worth mentioning though that Wallace admitted in a Rolling Stone interview in 1991 that for several decades he was part of a sexual harassment campaign which included snapping open the bras of female staff members. AS