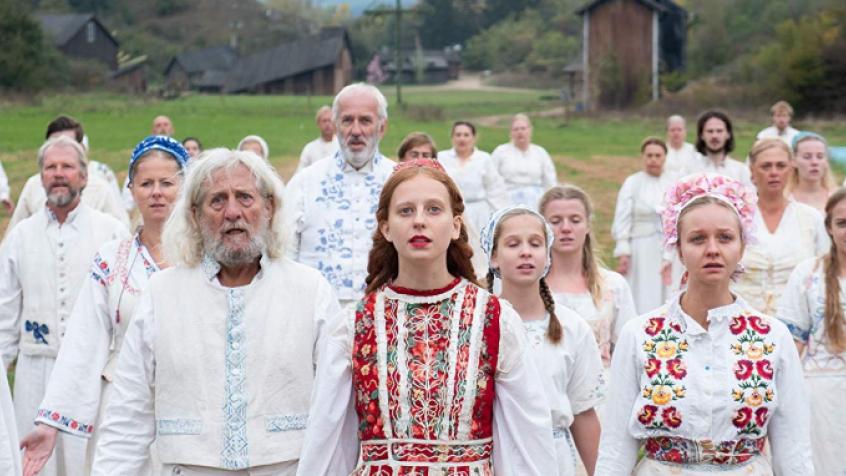 Ari Aster’s cult thriller has some inventive ideas about euthanasia and cultural differences in an avant-garde and violently disturbing re-imagining of Robin Hardy’s 1973 classic The Wicker Man.

Misommar is his follow-up to the weird but equally unsettling horror debut Hereditary. It again uses facial disfigurement, social dysfunction and emotional alienation as its tropes to scare the living daylights out of you.

Four young American dudes set off to Sweden for a remote, drug-fuelled summer folk festival. It’s not the trip they had in mind. The friendly welcome of white-clothed blonds frolicking wholesomely in the land of the midnight sun soon give way to a sinister, soul (and body) destroying experience when their own cultural references and expectations are completely shattered by those of this uncanny pagan community of Harga.

British actress Florence Pugh is terrific as a woman suffering a bizarrely gruesome family bereavement that plays out in the opening scenes. Dani then discovers her relationship is beyond its sell by date and her boyfriend Christian (Reynor) has already made summer plans that don’t include her. Unwisely she tags along on a trip that soon turns to dread, horror and tragedy as the smorgasbord of bizarre festivities take their toll on the uninitiated outsiders.

Joining Christian and Dani is former community member Pelle (Blomgren), Phd student Josh (Harper), and Mark (Will Poulter). After taking drugs, they are intrigued to join in the joyful celebrations involving May Tree dancing, Wotanism, medieval paganism and fertility rights.

Interestingly, while the Americans are shocked to the core at the commune’s way of dealing with old age, the residents find it all entirely acceptable – raising the interesting question of cultural diversity or, to put it literally: ‘different strokes for different folks”. But Aster often gets too excited with his ideas, losing sight of the bigger picture while disappearing down folkloric rabbit holes amidst languorous pacing and trippy tonal shifts.

Pawel Pogorzelski creates a visually startling feast with his bleached out colours, hair-raising camera angles and claustrophobic interior sequences, and Pugh and Reynor are remarkable in their ability to generate psychological angst. MT