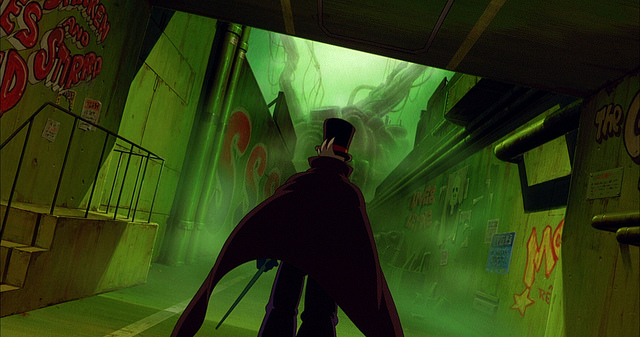 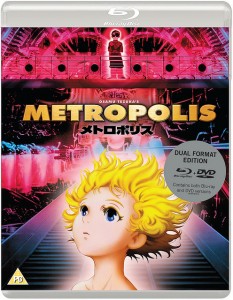 Directed by Rintaro, written by Katsuhiro Otomo and produced by Madhouse with conceptual support from Tezuka Productions, this science-fiction anime action is loosely based on the 1949 Metropolis manga created by Osamu Tezuka, itself inspired by Fritz Lang’s 1927 German silent film of the same name, though the two do not share plot elements. The anime, however, does draw aspects of its storyline directly from the 1927 film. METROPOLIS pictures an imagined future where humans and robots coexist in a city where robots are the underdogs forced to live in the city’s backstreets. This evergreen masterpiece mirrors our own contemporary society where the indigenous population is often unemployed and feels disenfranchised, blaming the immigrants (here robots) for taking their jobs. But Rintaro’s Japanese dystopia also fetishises technology. The narrative centres around Japanese detective Shunsaku Ban who arrives in Metropolis with his nephew Kenichi, hot on the tail of a corrupt scientist Dr Laughton. During their investigations they uncover Laughton’s secret creation: an ethereal robot called Tima who has an agenda that belies her often coy demeanour. Like an exotic TinTin on speed METROPOLIS‘ Art Deco aesthetic is visually lush and incandescent, dissolving and fizzing in a sparking psychedelic spectrum of colours. Otomo’s poetic script drives the story forward combining moments of terror with touching sadness set against at atmospheric ambient soundtrack of vintage jazz. Literally out of this world. MT

BLURAY RELEASE COURTESY OF EUREKA, MASTERS OF CINEMA in a limited edition Dual-Format SteelBook on 16 January 2017, and a Special Dual-Format edition on 13 March 2017.