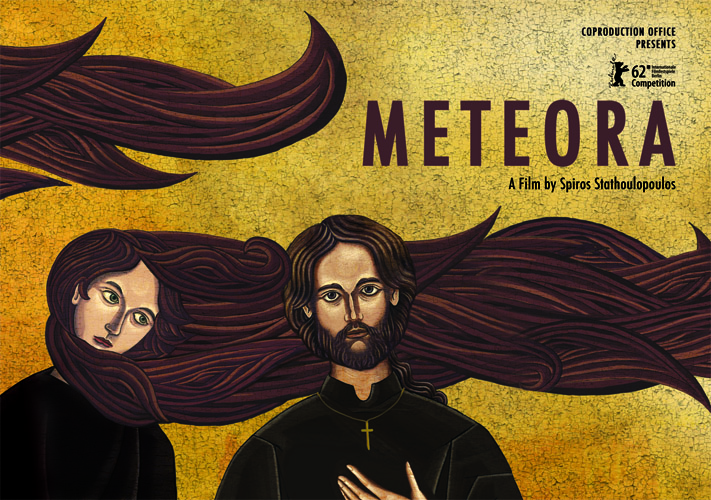 METEORA is a densely mountainous region in central Greece. Steeped in ancient history, it’s best known for its medieval Orthodox monasteries that cling miraculously to the peaks. In one such holy setting, filmmaker Spiros Stathoulopoulos’s part-animated drama imagines a love affair between a young lustful monk and his courtship with a nun in the convent on the opposite mountain-side. Making a perilous journey each day from their precarious perches they embark on an affair made all the more exciting by its illicit and dangerous nature. 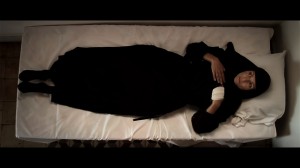 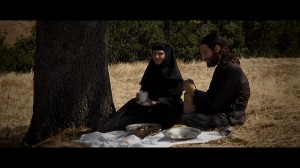 Spiros Stathoulopoulos uses delicately rendered animations of icons and religious motifs to illustrate his narrative conveying guilt, desire and inner conflict: the struggle of man against the strictures imposed by his pious maker serve to heighten the eroticism of their clandestine meetings which take place in sun-baked fields nearby, over a well-lubricated ‘dejeuner sur l’herbe’.

A million miles away from the Greek New Wave, hovering between the sacred and profane (in tone as well as concept),  METEORA feels like a legend from an illuminated manuscript that bursts into life in the arid heat of its heady summer setting, as the lovers finally unite. Fraught with images of desire and damnation, it references classical mythology and biblical events that are cleverly interwoven into the narrative (The Minotaur and Theseus, Christ’s crucifixion). Theodor (Theo Alexander/True Blood) and Urania (Tamila Kulieva) radiate strong sexual chemistry as they stray from cloistered celibacy to unbridled fornication in scenes reminiscent of Ken Russell’s The Devils or Dominic Moll’s The Monk.  Ultimately the message is a simple one: we’re all sinners in the eyes of God and this makes carnal love all the more appealing.  Despite some tonal shifts, the overall vibe is serene, slow-burning and sultry and suitably scored by music from the Middle Ages, including Perotin’s ‘Viderunt Omnes’. MT