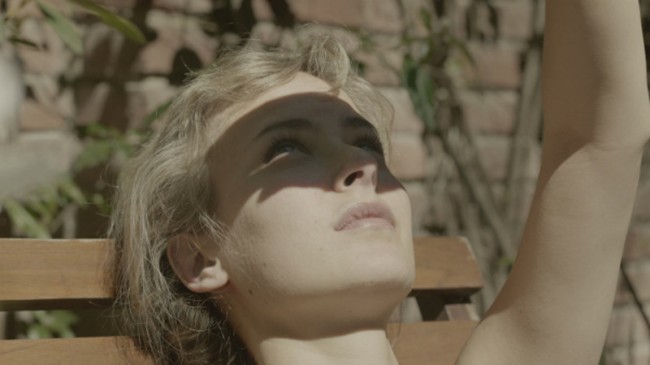 First time director/writer/editor/producer Sophie Goyette has created her own universe with this evocative feature, which is best described as a dreamy poem about love, loss, longing and music. The Canadian director, whose short films have been shown at all major film festivals, has successfully moved the boundaries: Mes Nuits allows us to see through the cracks of human nature in a reverie that is half dream, half reality.

The characters linger, we only get glimpses of them, but music, in many forms, is the connecting element. Debut DoP Lena Mill-Reulliard’s images heighten an atmosphere of yearning; colours dissolve delicately as tunnels and railways link the transience of the narrative. The nature scenes have a strong link to the poetry of Hermann Hesse. But the overall impression is elusive: Goyette has developed a film language which feels quite unique and unlike more conventional films.

Set in Montreal and Mexico, the film is divided into three chapters, in the first we meet Eliane (Préfontaine, who also composed the score), sitting in a Montreal garden in a ‘princess’ costume, entertaining a group of young girls at a birthday party. The atmosphere is somewhat unreal, the staging feels like we are watching a dream: this is the consistent element through the whole film. But after the ‘performance’, when talking to the host of the birthday party, Eliane gives us clues about herself: she wanted to go to the conservatoire to study singing but although her voice was up to the challenge she had never learnt how to read music, never mind score a melody played by a pianist during the examination. “I gave in an empty sheet with my name on it”.  Clearly there are reasons for this : Eliane has lost her parents in an accident, and she has not come to terms with it. To put some distance between herself and the trauma she travels to Mexico where she takes up residence in a house owned by the middle- aged Romes (Trejoluna), whose son she is teaching piano.

Once in Mexico, Eliane feels threatened by her new surroundings: “Mexico is hot, dangerous”. But she stays, and visits an open-air concert with Romes, where music by the German Baroque composer Johann Pachelbel transports her to another level – a fairy tale featuring an ancient dog. Romes has learned his English from watching American TV, and their communication is often difficult. Nevertheless, they seem to be at peace with each other. Elaine then talks about Chopin’s lifelong  depression, and we learn that he dedicated his last composition to his doctor. Eliane and Romes visit a mystical place called Cutemaco, where Romes has spent magical holidays as a child.

The focus then switches to Romes, who has lost his mother two years previously and still yearns for her. They talk on the phone together, but we don’t know if this is Romes’ dream or past reality. Romes is married, but we never see his wife, as he grows more and more morose. He is also troubled by the relationship with his father Pablo (Casanova), whom he accuses of having been cold towards his mother. He visits the old man in a care home, and they suddenly decide to visit China, “because we don’t have much time left”. In an unnamed metropolis in China, Pablo then becomes the central figure of the third chapter and as the denouement unspools, Romes’ story becomes clearer. Utterly unique and spellbinding. AS